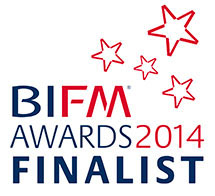 Representatives from the LMB attended a glittering ceremony, hosted by comic and actor Hugh Dennis, at The Grosvenor House Hotel on 13 October, as nominees for a British Institute of Facilities Management (BIFM) award. The BIFM is the professional body for facilities management. Founded in 1993, they promote excellence in facilities management for the benefit of practitioners, the economy and society.

The LMB’s new building was shortlisted in the ‘FM Excellence in a Major Project’ category, alongside BT Facilities Services Ltd, ISS and Barclays, and King’s College London and BouyguesESUK, who won the award on the night. The award focuses on the lasting impact of innovative thinking in a major project, which makes a significant contribution to almost every aspect of an organisation’s operating style and affects the majority of its employees. Major projects entered into this award may be of any business or building type, in either the public or private sector.

This nomination represented the major undertaking by the LMB’s Estates and Facilities (E&F) team in helping to plan and move the Laboratory to a new state-of-the-art research facility. The E&F team was involved in the early planning and project organisation and helped to ensure the services, systems and plant facilities were easy to maintain, met the latest environmental efficiency standards and were flexible enough to meet ongoing, changing scientific requirements. They had to ensure that the running and operational costs were reduced and within budget, and seek innovation in equipment and systems to provide this. The building, 2.5 times the size of the old LMB building, gave the E&F team a new, significant building and services infrastructure to learn and support in order to satisfy the research needs of the scientists.

The E&F team was part of a large dedicated group of LMB staff working in cooperation, whose extraordinary efforts ensured this major project was a great success, and transition to the new building was done with minimal disruption to the scientific research.

Terry Ling, Head of LMB Estates and Facilities, attended the ceremony and commented, “it was an honour to be short listed for this prestigious award and for the new LMB building project to be recognised for excellence in facilities management.”