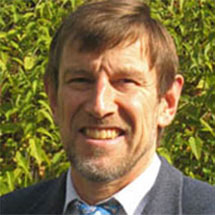 Professor Roland Lill from the Institute of Cytobiology, Philipps University Marburg, Germany, will deliver the Feldberg Prize Lecture on Friday April 15th at 4.15pm in the LMB’s Max Perutz Lecture Theatre. The lecture is open to anyone locally who is interested in attending.

Roland is currently interested in the biogenesis of iron-sulfur proteins in eukaryotes and the link to cellular iron homeostasis.

The title of the Feldberg Prize Lecture is: “FeS protein biogenesis in eukaryotes.”

In 1961, Professor Wilhelm Feldberg, CBE, FRS, established the Feldberg Foundation to promote scientific contact between German and English scientists within the sphere of experimental medical research. Each year a German and British scientist, acknowledged according to Feldberg’s wishes as outstanding in their particular field, are awarded the Feldberg Prize. Each recipient gives a prize lecture in each other’s country.