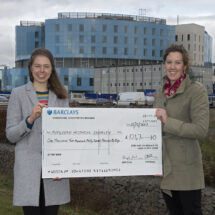 The LMB has held a Christmas raffle since the early 1970s and has supported many local and national charities. Each year the charity chosen will have a connection to someone at the LMB – either for the help and support they have given, or in remembrance of a member of staff. Since 2000 the LMB has raised nearly £23,000 for charity.