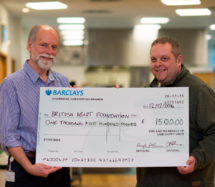 Over £1500 has been raised by LMB staff for The British Heart Foundation (BHF) at the annual charity Christmas raffle. The BHF was chosen in memory of Linda Burr, a member of the Biological Services Group, who tragically died earlier in 2016.

The BHF was founded in 1961 to fund extra research into the causes, diagnosis, treatment and prevention of heart and circulatory disease. The BHF is the biggest funder of cardiovascular research in the UK and also funds education, life-saving equipment and support for heart patients.

Nigel Cole, Fundraising Manager for Northants and Cambridgeshire, visited the LMB for the event to promote the charity and to start off the draw by pulling out the first ticket. Nigel said, “Thank you so much to everyone at LMB for joining the fight for every heartbeat. I had a great time at the raffle. I especially enjoyed the look of delight from the guy who won the Kylie calendar! Without your help and the help of people like you all over the country the BHF would not have made the massive strides it has in heart research. Massive thanks to the whole team for your fundraising this year.”

The LMB has held a Christmas raffle since the early 1970’s and supported many local and national charities.  Each year the charity chosen will have a connection to someone at the LMB – either for the help and support they have given, or in remembrance of a member of staff.  Since 2000 the LMB has raised nearly £22,000 for charity.