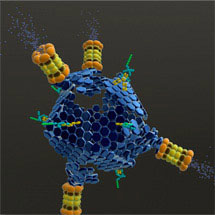 Landmark research led by Dr Leo James from the LMB’s PNAC Division has discovered that antibodies can fight viruses from within infected cells. This finding transforms the previous scientific understanding of our immunity to viral diseases like the common cold, ‘winter vomiting’ and gastroenteritis. It also gives scientists a different set of rules that pave the way to the next generation of antiviral drugs.

Viruses are mankind’s biggest killer, responsible for twice as many deaths each year as cancer, yet they are among the hardest of all diseases to treat. Previously scientists believed that antibodies could only reduce infection by attacking viruses outside cells and also by blocking their entry into cells. LMB scientists have now shown that antibodies remain attached when viruses enter healthy cells. Once inside, the antibodies trigger a response, led by a protein called TRIM21, which pulls the virus into a disposal system used by the cell to get rid of unwanted material. This process happens quickly, before the virus has a chance to harm the cell. The research team has further shown that increasing the amount of TRIM21 protein in cells makes this process even more effective, suggesting new ways of making better antiviral drugs.

Leo who led the study said: “Doctors have plenty of antibiotics to fight bacterial infections but few antiviral drugs. Although these are early days, and we don’t yet know the range of viruses that are cleared by this mechanism, we are excited that our discoveries may open multiple avenues for developing new antiviral drugs.”

Leo’s team is now working with MRC Technology to bring this exciting finding from laboratory bench to doctor’s cabinet as quickly as possible.