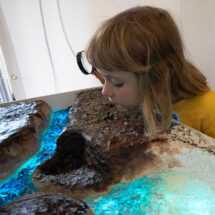 A team of researchers from John Sutherland’s and Philipp Holliger’s groups in the LMB’s PNAC Division, took their exhibit, “A Recipe for Primordial Life”, to this year’s Royal Society Summer Science Exhibition to tell the public about their work on the chemistry behind the origin of life.

Visitors were taken on a journey through time, starting with simple molecules 4.5 billion years ago on the early Earth, exploring the chemical reactions and conditions that allowed formation of the building blocks of life, and then reaching the moment when the first cells were formed that gave rise to all life on Earth. These were demonstrated through three different fun activities, in which members of the public searched for molecules hidden on a volcanic landscape, played a chemistry game to build amino acids, lipids, and nucleotides, and delved into the primordial soup to create the first cell-like assemblies. An eye-catching video animation accompanied the activities.

While describing research on the origin of life, the exhibit showcased the importance of collaboration between scientists from different fields, such as chemistry, geology and biology, who have come together to advance our understanding of where we came from.

Over the week, approximately 1,700 students and teachers visited the exhibition, as well as around 10,000 other members of the public. About 40 members of LMB staff volunteered to help out at the exhibit and to talk to the public about the origin of life.

If you want to know more about our understanding of the chemistry that allowed the first life on Earth, you can still explore the Recipe for Primordial Life webpages, watch the video animation below, and download the app to discover how simple molecules might have reacted together to produce life’s building blocks.

The Recipe for Primordial Life exhibit will also be at Ely Cathedral on Friday 28th and Saturday 29th September as part of LifeLab 2019.