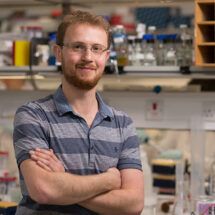 The LMB is delighted to announce the arrival of Joseph Yeeles to the LMB’s PNAC Division, to work on mechanisms of chromosome replication. Rapid and accurate chromosome replication is essential for maintaining genome stability. The process poses a major challenge to cells because a huge number of DNA bases must be copied despite the presence of obstacles, such as DNA damage, that can impede the progress of the replication machinery.

Eukaryotic replication is coordinated by a large and highly complex molecular machine called the replisome that is assembled from in excess of 30 gene products and which orchestrates the activities of multiple enzymatic components. During his postdoctoral work in John Diffley’s lab, Joseph became the first person to reconstitute eukaryotic DNA replication initiation with purified proteins, which represented a major milestone in the field. Joseph’s research will exploit this novel experimental system to look at the fundamental role the replisome plays in ensuring that the genome is replicated precisely once per cell cycle.

Joseph added, “I have a longstanding interest in the mechanisms deployed by cells to help ensure genomic stability is maintained. Our development of a reconstituted eukaryotic replication system provides exciting new opportunities to investigate mechanisms of chromosome replication in ways that were not previously possible. The fantastic facilities available at LMB, together with its focus on understanding biological problems at the molecular level, make it the perfect place for me to establish my lab.”

Joseph studied biochemistry and genetics at the University of Nottingham before undertaking a PhD in biochemistry at the University of Bristol. He then spent time as a postdoctoral scientist at the Memorial Sloan-Kettering Cancer Center in the USA, before returning to the UK as a FEBS Return to Europe Fellow at CRUK, Clare Hall (Francis Crick Institute) in the Lab of John Diffley.