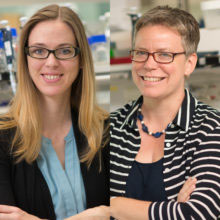 The LMB is delighted to announce the recent arrival of two new group leaders in the LMB’s Cell Biology Division: Madeline Lancaster and Liz Miller.

Madeline’s research is in the area of human brain development. Human brain development exhibits a number of unique characteristics, such as dramatic size expansion, unique cell types, and distinct neural stem cell behaviours. These characteristics are difficult to examine in model organisms such as mice and are often involved in neurological diseases unique to humans, like autism and schizophrenia.

In an effort to better understand human brain development, Madeline developed a new model system, called cerebral organoids. These mini-brains are 3D tissues generated from human pluripotent stem cells that allow modelling of human brain development in vitro. Madeline’s current research is focused on neurodevelopmental disorders such as autism and intellectual disability, by introducing mutations seen in these disorders and examining their roles in pathogenesis in the context of organoid development. She is also studying cellular mechanisms underlying neurodevelopment disease progression and potential therapeutic avenues.

Madeline added, “These studies will hopefully shed light on fundamental questions about what makes us human and begin to tackle difficult questions pertaining to a number of debilitating neurological diseases: this new approach could have a big impact on health care. The collegial environment at the LMB will help foster important collaborations necessary for success of this research, and will enable us to tackle difficult questions in new and exciting ways.”

Madeline studied biochemistry at Occidental College, Los Angeles, USA, before undertaking a PhD in biomedical sciences at the University of California, San Diego, USA. She then joined the Institute of Molecular Biotechnology of the Austrian Academy of Sciences (IMBA) in Vienna, Austria as a postdoctoral researcher, before joining the LMB.

Liz is studying protein transport and quality control in the secretory pathway. The ability of individual cells to perceive and interact with their specific environments relies on the efficient and accurate deployment of proteins to the cell surface. These proteins comprise a vast diversity in structure and function, making their biogenesis in the endoplasmic reticulum (ER) a complex feat of cellular engineering. Research in Liz’s lab is broadly aimed at understanding these basic mechanisms of secretory protein biogenesis, focusing on how proteins pass a quality control checkpoint before they are permitted to the leave ER.

The group uses the budding yeast, Saccharomyces cerevisiae, as a model system, which affords facile biochemical, genetic, genomic and proteomic tools. By using such a tractable model system, they can rapidly discover new pathways and dissect mechanisms that may be directly relevant to a number of human diseases, most notably cystic fibrosis and similar diseases of protein misfolding.

Liz explains, “Our current focus takes two complementary approaches: we aim to understand how the abundance and architecture of ER-derived transport carriers might directly contribute to quality control by adapting to changing physiological needs; and we are dissecting a novel conserved protein complex that acts early during membrane protein synthesis to modulate protein fate. The colleagues and resources here at the LMB will permit us to take our research in directions that simply weren’t feasible at Columbia. Our interactions with experts in diverse areas who share an underlying passion for biology are already enriching our own thinking.”