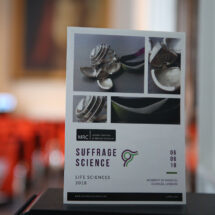 After two years holding the Suffrage Science scheme award, Lori Passmore has now passed her jewellery heirloom on to LMB alumnus, Rebecca Voorhees. Launched in 2011 by the MRC London Institute of Medical Sciences, the Suffrage Science scheme celebrates women in science for their scientific achievement and for their ability to inspire others. The awards are heirloom items of jewellery, similar to those worn by the Suffragettes, which are inspired by science and were designed by art and design students at Central St Martins in collaboration with scientists, and passed from awardee to awardee.

Lori said, “It was such an honour to receive a Suffrage Science award but I am even more pleased to pass it on to Rebecca. This award prompted me to acknowledge some of the fantastic women who have inspired me, and to tell them about their impact on my career. Suffrage science provides personal recognition and encouragement to women in science.”

Rebecca Voorhees completed her PhD in 2011 in Venki Ramakrishnan’s group in the LMB’s Structural Studies Division. She then went on to complete postdoctoral research at the LMB before setting up her own lab at Caltech, USA, in 2017. Rebecca’s research aims to unravel the molecular mechanisms of protein biosynthesis and assembly, and in addition her lab wants to understand how cells recognise and degrade messenger RNAs and proteins that fail during maturation.

On why she chose to pass the award on to Rebecca, Lori said, “Rebecca tackles challenging scientific problems with enthusiasm and provides a unique perspective. She is an excellent colleague – thoughtful, provides mentorship to junior colleagues and offers advice to others. Her ambition and insights have been inspirational.”

Rebecca added, “It is a tremendous honour to have been nominated for a Suffrage Science award. It is especially meaningful that the award is being passed on by my colleague and friend, Lori Passmore, whom I hold in the highest esteem as both a scientist and mentor. Recognition from Lori and Suffrage Science is particularly valuable at this challenging and exciting time in my career, having started my independent research group this year. It is an absolute privilege to be a part of this community of women scientists. Being nominated for this award has given me an opportunity to reflect and consider the scientists, both male and female, who have inspired and supported me over the years. I owe a particular debt of gratitude to the LMB, as I absolutely would not be the scientist I am today without the experiences I had as a PhD student and postdoc in Cambridge.”