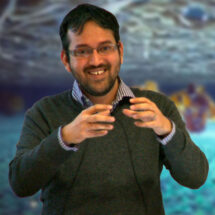 M. Madan Babu, a Group Leader in the LMB’s Structural Studies Division, will deliver the annual Francis Crick Lecture at the Royal Society on 7th December 2016. During the lecture, entitled “Unstructured proteins: cellular complexity and human diseases”, Madan will look at the cutting-edge computational techniques which are providing insights into how unstructured proteins perform their functions, contribute to cellular complexity and cause human diseases including cancer and neurodegeneration.

Madan was awarded the prestigious Medal and associated Lecture for his major and widespread contributions to computational biology. Madan’s group is interested in understanding how mutations in the structured and intrinsically disordered regions of proteins affect regulatory and signalling networks – at the levels of molecules, processes and genomes – and how this contributes to disease. To achieve this, the group uses a combination of computational approaches involving sequence, structural and evolutionary analyses to probe large datasets and is pioneering novel integrative approaches that combine theory and experiments. 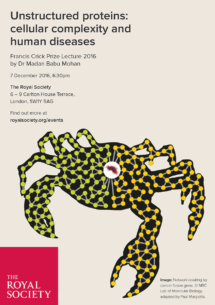 The Royal Society recognises excellence in science and technology through its medals, awards and prize lectures. The Francis Crick Medal and Lecture is awarded annually to an early career stage scientist in any field in the biological sciences. Preference is given to genetics, molecular biology and neurobiology – the general areas in which Francis Crick worked – and to fundamental theoretical work, which was the hallmark of Crick’s science. Previous LMB winners include Sarah Teichmann (2012) and Jason Chin (2009).

This year’s Lecture takes place at the Royal Society from 6.30-7.30pm on Wednesday 7th December. The event is free to attend – no tickets are required – and is aimed at scientists within the field, early career researchers and interested members of the general public. Doors open at 6pm and seats will be allocated on a first-come-first-served basis. The lecture will be webcast live on the Royal Society website and a recorded video will be available a few days afterwards.