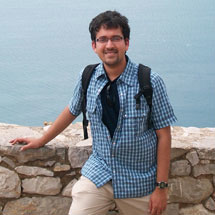 Dr Madan Babu, group leader in LMB’s Structural Studies Division, has been selected to deliver the first Royal Society of Chemistry’s Molecular BioSystems Award Lecture at the 2011 American Chemical Society’s Spring Meeting. Madan has been chosen as the recipient for his significant contribution to the field of Systems Biology. He has also just been awarded the 2011 Balfour Lecture by the Genetics Society for his contributions to the areas of Computational Biology and Genetics.

These two awards add to other recent prizes Madan has received lately including being selected as an EMBO Young Investigator in November last year.

When appointed to the LMB in 2006 Madan was one of the youngest independent group leaders and he now leads the Computational Systems Biology Group at the LMB. His research focuses on understanding the structural, functional and evolutionary constraints that shape biological systems.

Madan will deliver the Molecular BioSystems Award Lecture in Anaheim, California in 2011 and will present the 2011 Balfour Lecture at one of the meetings sponsored by the Genetics Society in 2011, or possibly 2012.