Two LMB group leaders, both from the Structural Studies Division, are honoured by the inaugural Blavatnik Awards for Young Scientists in the UK. M. Madan Babu is the winner in the Life Sciences category, while John Briggs is one of the two finalists in the same category.

The Blavatnik Awards at The New York Academy of Sciences honour outstanding young scientists under the age of 42. The awards celebrate the achievements and future potential of young faculty researchers working in three disciplines – life sciences, physical sciences and engineering, and chemistry.  For ten years they have recognised the most innovative young scientists across the United States.  From 2018, they have extended these awards to the UK and Israel. 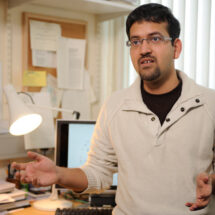 Madan is the 2018 Blavatnik Awards for Young Scientists in the United Kingdom Life Sciences Laureate. He has been recognised for research that provides ‘insights into the structural biology and molecular logic of key proteins and protein motifs, including G-protein coupled receptors and intrinsically disordered protein regions’.

Working in the field of computational biology and bioinformatics, Madan develops new approaches that combine techniques from data science, genomics and structural biology to investigate biological systems at multiple levels. Through this innovative approach, Madan’s work has revealed mechanistic details of G-protein-coupled receptors (GPCRs), a class of proteins that are major drug targets and implicated in numerous human disorders. Madan’s group has identified common and distinct features of GPCRs that will aid the development of more specific, targeted medicines. The findings could potentially have a major role in the development of personalised medicine.

Madan has also made fundamental discoveries about the role of unstructured proteins. While most proteins need to adopt defined structures to perform their function, about 40% of human proteins has large regions that do not adopt defined structures and yet perform functions that are critical for the survival. These are known as intrinsically disordered regions (IDRs). Through a combination of genome-scale computational approaches, big data analysis, machine learning and experimental validation, Madan’s group has made significant contributions to understand the roles of IDRs in human health and disease.

Madan comments, “We are living in an exciting time with unprecedented amount of biological information and data. We would like to use this unique opportunity to develop new approaches to better understand how living systems work.” 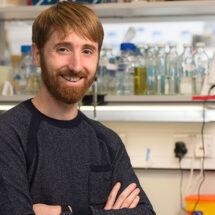 John is a 2018 Blavatnik Awards for Young Scientists in the United Kingdom Life Sciences Finalist. He has been recognised for ‘advances in high-resolution visualisation of viral particles including HIV, using electron cryo-tomography combined with fluorescence imaging’.

John uses and develops state-of-the-art techniques in electron microscopy to understand viral and vesicle coat assembly and function. In particular, his group has been one of the pioneers of electron cryo-tomography (cryo-ET), which allows visualisation of biological specimens at near-atomic resolution. He has also combined this and related electron microscopy techniques with fluorescence microscopy which allows for the identification of rare and dynamic cellular events, and then the imaging of these events at high resolution. John’s group was the first to achieve pseudo-atomic resolution for visualisation of a biological structure using cryo-ET, revealing the capsid domains of HIV. This achievement revealed the network of protein interactions that governs the assembly of HIV particles, and provides new insights into viral function.

John is now working on higher resolution visualisations of cellular processes directly within their native environments. By turning these techniques to important biological questions like the structure of HIV, his work will have broad impact on our understanding of the biology of cells and viruses.

John adds, “We can learn a lot by getting detailed 3D views of protein complexes in their native environments, inside cells or viruses. The rapid development of electron cryo-microscopy is now making this possible – that is very exciting for us!”

Both Madan and John will be honoured by Sir Leonard Blavatnik at the Inaugural Blavatnik Awards UK Ceremony at the Victoria & Albert Museum in London, on 7th March 2018..