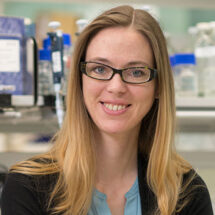 Madeline Lancaster from the LMB’s Cell Biology Division has been announced as the joint winner of this year’s 3Rs Prize competition, run by the NC3Rs, and sponsored by GlaxoSmithKline (GSK). This Prize is awarded to an original research paper published within the last three years that has outstanding scientific or technological potential to replace, reduce or refine the use of animals in research. Applications were judged by an expert scientific panel, chaired by Professor Ian Kimber OBE, and the Prize ceremony took place on Monday 29th February, with 150 attendees from across the scientific community. Madeline’s group is studying brain development and disease using in vitro methods to model human disease. The Prize recognises her work on a 3D model of the embryonic human brain created from stem cells that minimises the use of animals in medical research.

The National Centre for the Replacement, Refinement and Reduction of Animals in Research (NC3Rs) is a leading independent scientific organisation dedicated to replacing, refining and reducing the use of animals in research and testing (the 3Rs). The 3Rs Prize is part of its strategy to recognise excellence in science which minimises animal use or improves animal welfare. Madeline’s prize recognises her work with Professor Juergen Knoblich, at the Institute for Molecular Biotechnology in Vienna, published in Nature, on a 3D model where brain tissue is able to spontaneously self-organise to form a structure resembling the human embryonic brain. These so-called ‘cerebral organoids’ represent a major scientific breakthrough because for the first time the complexity and structure of the developing brain has been replicated in vitro.

The paper also describes how the cerebral organoids can be used to model human microcephaly, a disorder recently in the news because of its association with the Zika virus outbreak. The group observed that organoids created from patient-derived induced pluripotent stem cells were abnormally small, consistent with the smaller brains seen in microcephaly patients. Further investigation revealed a defect in a specific neural stem cell population causing patient-derived organoids to generate neurons too early and eventually become depleted, leading to an overall smaller structure.

The suitability of animal models in studying brain development and disease can be limited, as the brains of commonly used animals such as rats and mice are less complex and lack crucial components present in the human brain. The development of the ‘cerebral organoids’ has significant implications not only for studying neurological diseases and the development of new treatments, but also for replacing some animal studies. It is hoped that in the future the brain organoid method could be developed to model psychiatric disorders and even the ageing brain and neurodegeneration.

The work was supported by the Austrian Academy of Sciences and the Austrian Science Fund (FWF), and post-doctoral fellowships from EMBO and the Helen Hay Whitney Foundation (HHWF).