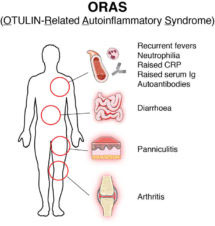 The cause of a potentially fatal inherited autoimmune disease has been identified for the first time. The disease, now named OTULIN-related autoinflammatory syndrome (ORAS), was discovered by doctors treating patients who developed symptoms such as rashes, fever, and diarrhoea shortly after birth. The immune system of these patients spontaneously activates and starts to attack the patient’s own body leading to the described symptoms and eventually to the child’s death. Doctors performed extensive investigations describing the symptoms and analysing patients, but the origin of the disease remained obscure for years. Now, as a result of collaborative research involving the groups of David Komander and Andrew McKenzie in the LMB’s PNAC Division, Professor Eamonn Maher’s group in the Department of Medical Genetics, University of Cambridge and colleagues at the University of Birmingham, the cause of this disease has been discovered.

The breakthrough began when a team of geneticists led by Prof Eamonn Maher analysed the genomes of the patients and found a clue to its origin. Prof Maher’s team found a mutation in the patients in a gene called OTULIN. OTULIN was discovered, and named, in 2013 by David Komander’s group. They discovered that OTULIN is a deubiquitinating enzyme that specifically cleaves so-called linear ubiquitin chains (ubiquitin chains linked via a methionine residue, Met1 or M1). The assembly of these linear ubiquitin chains is a key alarm signal that sets off an inflammatory response by activating nuclear factor-κB (NF-κB) transcription factors that orchestrate immune responses. Since 2013 the Komander group has been working to understand the role that OTULIN plays in regulation of the immune system and in health and disease. Together with Andrew McKenzie’s group, they uncovered a crucial role for OTULIN in restraining the activity of the immune system using experimental mouse models, but the team lacked evidence for its importance in humans.

Hence, the groups were excited when they were contacted by Prof Maher to set up collaborative research to further investigate the molecular basis of the disease. Knowing the importance of OTULIN in humans, and which symptoms defects in the OTULIN enzyme causes, the team was able to reconstruct the disease in experimental mice in which OTULIN was removed from immune cells. These mice developed syndromes with similar hallmarks to the human syndrome ORAS. This enabled further detailed study and a mechanistic understanding of the disease and of the consequences of OTULIN loss. The work in the experimental mouse models was absolutely crucial for understanding the mechanism of the disease. The team discovered that OTULIN works by restricting the cellular levels of linear ubiquitin, effectively acting as the foot on the brake to ensure the immune system does not take off without permission. In the absence of OTULIN, the level of linear ubiquitin is not controlled and the immune system is activated even in the absence of infection. The hyper-activated immune system starts attacking the patients own body rather than an invading bacterium or virus, leading to the described symptoms.

Most importantly, the team also found a treatment for the ORAS disease. All the symptoms of ORAS both in experimental mice and in patients can be eliminated by giving them an antibody that blocks one of the primary hormones, called TNF, mediating the activation of the immune system. By blocking the function of TNF, the symptoms are relieved and ORAS patients can live a normal life. Importantly, the TNF blocking antibody drug, called Infliximab or Remicade, is already approved for the treatment of other autoimmune and inflammatory diseases, including rheumatoid arthritis and Crohn’s disease, making it easily accessible to the patients and a good example of repurposing of already clinically approved drugs.

This work highlights the importance of the ubiquitin system, in particular its key role in regulating normal immune function in humans. This work has further implications for the development of drugs that target the ubiquitin pathway, as it is clear that any drugs that prevented OTULIN from functioning would likely have negative health impacts.

This work was funded by the MRC, ERC, Lister Institute for Preventive Medicine, EMBO Young Investigator Programme, a Marie Curie Fellowship from the European Commission, Wellcome Trust, Wellchild and UBC.