The title of the lecture is ‘Reconstituting T Cell Signalling’. The event is open to anyone in the local area who is interested in attending.

Ron is a co-discoverer of kinesins, a large family of microscopic molecular motors vital for several aspects of life including how the heart beats and how cells transport material around internally. Ron was interested in the problem of nerve regeneration and how material was transported inside nerve cells along the length of a nerve fibre. Through this research, the kinesins were discovered. Ron then moved on to show, with colleagues, how kinesin converts chemical energy into forward motion by using the energy of ATP to cause changes to the shape of the protein. The shape changes enable kinesin to take steps along a microtubule in a hand-over-hand motion. Kinesins and other motor proteins are also associated with a number of human diseases, including cardiomyopathies and neuropathies, and molecular motors are drug targets for heart failure, skeletal muscle dysfunction and cancer. Ron’s lab now combines several techniques to understand spatial organisation, movement, and signalling within cells.

Ron received his BS degree in biology and chemistry from the University of California, Santa Barbara and his PhD in neuroscience from Stanford University. He undertook postdoctoral studies at the Marine Biological Laboratory and has been a faculty member at the University of California, San Francisco (UCSF) since 1986. He is now Professor, Department of Cellular and Molecular Pharmacology and a Howard Hughes Medical Institute Investigator. He was jointly awarded the 2012 Albert Lasker Basic Medical Research Award and is a member of the Institute of Medicine, US National Academy of Sciences and the National Academy of Medicine.

The T cell immune response is initiated when the major histocompatibility complex (MHC) protein on the surface of an antigen-presenting cell (APC) interacts with the T-cell receptor (TCR) on a T lymphocyte. We are attempting to understand the initial events in signal propagation using a reductionist approach. In cells, we have replaced the normal T cell receptor with a chimeric receptor that can be engineered to study how variations in ligand binding affinity are transduced into intracellular signals. We also have been reconstituting biochemical reactions in the signalling pathway. With ~12 purified proteins or protein complexes, we have been able to reconstitute the signalling pathway from TCR phosphorylation to the nucleation of actin polymerization on planar lipid bilayers. This work illustrates how biochemical reconstitution combined with light microscopy can be used to dissect the biochemical network that underlies the T cell signalling cascade.

The Max Perutz Lecture is named in honour of the LMB Nobel Laureate Max Perutz. It is one of a series of named lectures organised by the LMB and given by eminent scientists from around the world. Max Perutz arrived at the Cavendish Laboratory in Cambridge in 1936, to work in the field of X-ray crystallography. This move would lead to him becoming a pioneer in the new field of molecular biology, co-founding a world-class research laboratory and developing a technique to unlock the structures of proteins. Max played a key role in the history of the LMB. He was Director of the ‘MRC Unit for Research on the Molecular Structure of Biological Systems’ when it was established in 1947; and when the unit became the MRC Laboratory of Molecular Biology (LMB) in 1962, he became its first Chairman. Max Perutz officially retired as Chairman of the LMB in 1979, having overseen the development of the MRC unit into a first class research laboratory. He died in Cambridge on 6 February 2002, aged 87.

Following the main lecture, Ron will give a short talk on ‘The Future of Preprints in Biology’ followed by a Q&A with the audience.

A preprint is a complete scientific manuscript, often the same one being submitted to a journal, that is uploaded by the authors to a public server. Physicists widely use preprints to rapidly communicate their research findings through a server called arXiv as well as using peer-review publication. Is it time for biologists to do the same? What are the benefits of using preprints for junior and senior scientists? Do funding agencies and journals support the use of preprints in biology? What are the concerns or potential unintended consequences of preprints? These questions, and others that you might have, will be addressed in this hour long session (with half of the hour devoted to a Q&A). Ron will also discuss outcomes from two recent meetings (February 16th/17th at the Howard Hughes Medical Institute and May 24th at the NIH), which were both focused on the role that preprints might play in biology. For more information, go to ASAPbio.org or read the commentary on the first ASAPbio meeting which will be published in Science Magazine on May 20th. 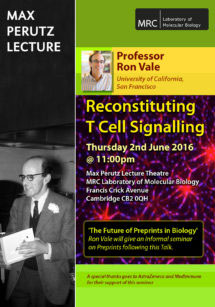