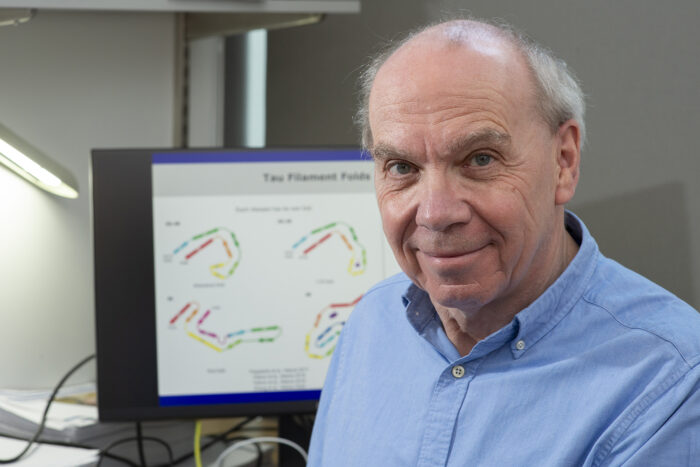 Michel Goedert, Group Leader in the LMB’s Neurobiology Division, has been awarded the 2021 Hartwig Piepenbrock-DZNE Prize for his outstanding contributions to the study of neurodegenerative diseases. Awarded every two years since 2011, this Prize is given jointly by the Piepenbrock Group and the Deutsches Zentrum für Neurodegenerative Erkrankungen (DZNE), in memory of Hartwig Piepenbrock, the Group’s former Chairman, who passed away with dementia.

Michel was part of the 1988 work at the LMB, which showed that tau protein is an integral component of the paired helical filaments of Alzheimer’s disease. This work led Michel and others to characterise assembled tau in Alzheimer’s disease and other neurodegenerative diseases. Assembly of tau into abnormal filamentous inclusions is probably the gain of toxic function that underlies all tauopathies. Michel and collaborators also identified alpha-synuclein as the major component of the filamentous inclusions of Parkinson’s disease, dementia with Lewy bodies and multiple system atrophy. Together, tauopathies and synucleinopathies account for the vast majority of cases of late-onset neurodegenerative disease.

In more recent work, in collaboration with Sjors Scheres from the LMB’s Structural Studies Division, Michel and his group are using electron cryo-microscopy (cryo-EM) to determine the high-resolution structures of amyloid filaments from the brains of individuals with a number of different neurodegenerative diseases. Their latest work has classified tauopathies based on the structures of tau filaments.

Michel joined the LMB as a Postdoctoral Fellow in 1984 and became a Group Leader in 1987. He also served as Head (joint or sole) of the Neurobiology Division from 2003 to 2016.

Michel said: “I am honoured to be awarded this year’s Hartwig Piepenbrock-DZNE Prize and I want to thank my colleagues and collaborators for their contributions over the years. Hopefully, the new knowledge will lead to the development of safe and effective mechanism-based therapies for common neurodegenerative diseases.”

The recipients of the Hartwig Piepenbrock-DZNE Prize are chosen by an international committee. Previous awardees are: Konrad Beyreuther; Charles Weissmann and Adriano Aguzzi; John Hardy; Heiko Braak; and Christian Haass. The award ceremony will take place in the Bundeskunsthalle in Bonn on 14th February 2022.