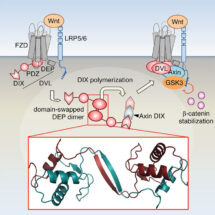 Signalosomes are tiny three-dimensional mesh-like particles that arise by transient local aggregation of otherwise diffuse proteins. Their assembly is triggered by signals from outside of the cell, and they function to relay these signals to the inside of cells to change the cell properties and fates. The transient local aggregation of proteins (known as phase transitions) is commonly observed in cells, but the mechanisms that control their assembly are largely unknown.

Using a combination of crystal structure determination, biophysics, NMR, biochemistry and cell biology, Mariann’s group identified a crucial step during Wnt signalosome assembly – the cross-linking of individual Dishevelled polymers into a mesh which depends on a reciprocal interaction between two Dishevelled molecules (via their DEP domain) reminiscent of a handshake. The discovery has led to a new mechanistic model of Wnt signal transduction, in which Wnt-induced clustering of Dishevelled in clathrin-coated pits triggers DEP domain swapping and consequently signalosome assembly and signal transduction to the nucleus.

This work not only provides a model for how signalosomes transiently form, but also advances the understanding of Wnt signaling. The Wnt signalling pathway is of major importance in cancer, most notably in colorectal cancers most of which are initiated by derailed Wnt signalling in the bowel. A detailed molecular understanding of this pathway can inform therapeutic strategies and rational drug design.

The work was funded by the MRC and Cancer Research UK.