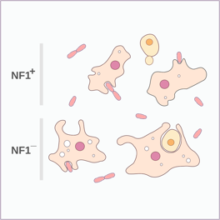 Many of our cells can engulf solid particles and liquid droplets to ingest (swallow) them. Phagocytes ingest invading bacteria and dead cells during infections in the same way that our single-celled distant ancestors engulfed food that they needed for growth. A core group of genes is found within these ancient organisms that is also important for controlling phagocytosis and cell growth in humans. Using the amoeba Dictyostelium as a model, Rob Kay’s group from the LMB’s Cell Biology Division have discovered a previously unrecognised role for a human disease gene, Neurofibromin (NF1), in controlling this ingestion process.

Dictyostelium discoideum is a social amoeba that is naturally found in soil. It is widely used in the laboratory as a ‘model organism’ to study how cells move and how they fight bacterial infection. Dictyostelium amoebae normally feed on bacteria, but for decades researchers have relied on laboratory mutants that can also grow on liquid media. Gareth Bloomfield and his colleagues in Rob’s group isolated these mutant amoebae, able to grow in conditions where normal cells would starve, and sequenced their genomes to find out which mutations were present.

They discovered that ingestion of solid and liquid food in Dictyostelium is regulated by the tumour suppressor gene Neurofibromin (NF1). When NF1 is mutated, the cells can take up more liquid food by macropinocytosis and engulf larger particles by phagocytosis, thus providing more food and faster growth for the mutant cell. As a tumour suppressor, the human version of NF1 is frequently mutated in cancers and these results suggest that NF1 mutations could remove growth inhibition by increasing uptake of food by mutant cells. Previous efforts to treat cancer have tried to prevent the aggressive feeding by tumour cells: understanding the mechanisms underlying these behaviours could lead to better cancer treatments.

Mutations in the human homology of NF1 also cause the genetic disorder Neurofibromatosis type 1, in which tumours grow along nerves, causing skin discoloration and non-cancerous lumps under the skin, and can also cause mild learning difficulties and other health problems. This is currently incurable, but better understanding the role of NF1 in cell growth could lead to therapies to help sufferers.

The research shows how some of the most important human disease genes have very ancient functions, and how trying to understand how they evolved and how they still function in widely different organisms can teach us about causes and possible treatments for human diseases.

This work was funded by the MRC and by ‘Leonardo da Vinci’ funds from the European Commission.