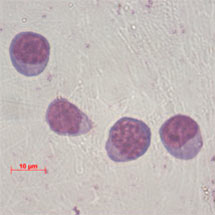 Andrew McKenzie’s group in the LMB’s PNAC Division have shown for the first time that a new immune cell type, the nuocyte, can orchestrate the initiation of allergic asthma in an experimental model. Nuocytes were shown to cause airway hyperactivity – a key feature of human asthma.

Previous research has shown the underlying allergic asthma response to be dependent on protein ‘interleukins’ that are released as cellular messengers, telling immune cells where to go and how to act. In particular, interleukin IL-13 is a key part of the response, critical for airway narrowing and inflammation.

While previously it was thought that the crucial source of IL-13 was T lymphocytes, Jillian Barlow and co-workers in the McKenzie group have shown that nuocytes are also an important source of IL-13 during the asthma response.

The researchers showed that nuocytes produce IL-13 during allergic asthma response in mice, and production of IL-13 by nuocytes can promote the allergic response, even in the absence of IL-13-producing T lymphocytes. Furthermore, IL-13 production by nuocytes restores airway narrowing and inflammation in mice that do not usually develop allergic asthma.

This discovery is an important step in determining whether nuocytes could be a new drug target for asthma treatment. Asthma currently affects 5.4 million people in the UK. The NHS spends £1 billion per year on asthma treatments to control symptoms, but quality of life can still be affected and for some sufferers the treatments don’t work at all.
The research was funded by the Medical Research Council, American Asthma Foundation, Centocor (Johnson & Johnson) and Asthma UK.