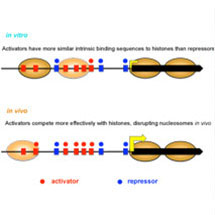 New research, resulting from a collaboration between two groups, led by Sarah Teichmann and Madan Babu, in the LMB’s Structural Studies Division, advances our understanding of the interplay between the two most abundant classes of DNA binding proteins that are responsible for regulating physiological diversity in organisms.

Although the two types of proteins that coordinate the transcriptional program in cells − transcription factors (TFs) and nucleosomal histones − are known to function interdependently, the majority of earlier studies investigated their roles in regulating expression of genetic traits separately, or focused on limited subsets of one or a few TFs.

As lead researcher Varodom Charoensawan explains, his team followed a very different approach: “We decided to integrate several publically available data sets of large-scale experiments and use high performance computing to intensively analyse the correlations between the DNA binding specificities of all known TFs and histones in a unicellular model organism.
“This allowed us to formulate a general mechanism for how TFs activate or repress the expression of genes. More specifically, we were able to show that activators tend to have binding site similarity to nucleosomal histones, resulting in competition for binding to DNA, while repressors reveal the opposite trend.”

The team’s approach, set out in a paper in Molecular Cell, may serve as a platform for similar genome-wide analyses in higher eukaryotes such as animals and plants. In the longer-term, by providing a better insight into how genes are expressed under different environmental conditions, the team’s findings may help researchers to understand and manipulate the process more effectively. Ultimately, that might lead to the design of controllable biological systems to help treat diseases involving gene expression malfunction; or to the breeding of new plants with greater resistance to climate change.

This work was supported by the Medical Research Council, by a Royal Thai Government Scholarship and a Mahidol University new researcher grant and Faculty of Science top up grant.