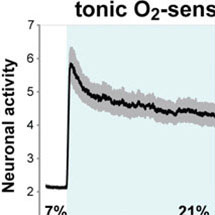 A group of researchers, led by Mario de Bono’s group in the LMB’s Cell Biology division, have extended our understanding of how animals respond to long-term dangers at a molecular level – which may help in explaining how this process fails in a range of human diseases and medical conditions.

Sensory neurons send the brain a barrage of environmental information. Most of these neurons react briefly to short-term stimuli and ignore the stimulus if it persists. However, some signals are so important that they need a more sustained response, using specialised neurons called tonic receptors.

The body has dozens of tonic receptors – ranging from the stretch receptors that help us maintain our posture and balance, through to pain receptors and sensors that monitor levels of oxygen and carbon dioxide. However, how they function is poorly understood.

To help understand how tonic receptors work, Karl Emanuel Busch and Patrick Laurent – the lead authors – executed a set of experiments using the worm C. elegans. This worm prefers to be buried, and seeks to avoid the high oxygen concentrations at the surface by changing its speed or direction of travel, or by aggregating with other worms to collectively alter oxygen concentrations. This avoidance is controlled by a small set of oxygen-sensing neurons. Intriguingly, these neurons stay ‘on’ for as long as the stimulus persists. Their long-lasting activity transforms the behaviour of the worm for as long as the stimulus remains there. Using a set of genetic tools, the team worked out the molecular mechanisms in the oxygen-sensing neurons that are required to generate these tonic signals, and determined how these signals are transformed in different downstream neurons to elicit both short and long-term behavioural change.
These findings are significant in showing how long-lasting behavioural changes are encoded in the nervous system of an animal. Although C. eleganshas a simple nervous system the team’s work is also relevant in understanding more complex nervous systems such as our own.