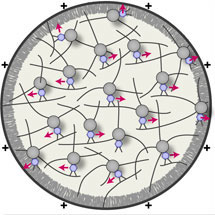 Melina Schuh, in the LMB’s Cell Biology Division, has uncovered for the first time a new transport system for long-range transport of vesicles in animal cells. This discovery could re-write the textbooks on the subject.

Intracellular transport is vital for the function, survival and architecture of every cell. The contents of our body’s cells are constantly on the move. Just as we need to get to different places to do different things, different cell contents need to travel to different sites within a cell to fulfill their task. To do this cells wrap their transport cargo into vesicles, which are small membrane enclosed carriers. Until now it was thought that to move long distances these vesicles move along microtubule tracks. Like a super highway, these tracks provide a fast but constricted path.

In a study published in the journal Nature Cell Biology today, Melina shows that vesicles can deploy a much more flexible transport system than the constricted movement along microtubules: they organize a dynamic and complex transport network of actin filaments.

High resolution imaging of vesicles in live mouse oocytes revealed that vesicles were very mobile, moving in a zigzag pattern over long-distances through the cell. When searching for the tracks that the vesicles moved along, Melina unexpectedly found that they moved within a dynamic actin network that filled the entire cell. The actin ‘roads’ are built by three specialized proteins, Formin-2, Spire1 and Spire2, that assemble actin filaments from the vesicle surface. The motor protein that drove the vesicle movement was consistently found to be Myosin-Vb, a motor that moves along actin filaments.

This dynamic vesicle-actin-network allows vesicles to move in a local random manner and a global directed manner at the same time: they can reach any position in the cytoplasm, but also move directionally to the cell surface as a collective. Thus, this new transport system is much more flexible than constricted movement along microtubules.

This new discovery provides a possible explanation for why secretion in some cell types is independent of microtubules, and why certain pathogens and viruses, such as HIV, can move through cells if microtubules are absent.

This work was supported by a Framework Programme-7 EU Grant, and the Medical Research Council.