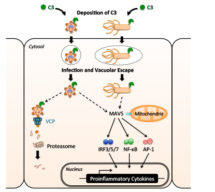 Research from the LMB’s PNAC Division has revealed a new mechanism that cells use to fight infection. Jerry Tam and other members of Leo James’s group have discovered that the protein complement C3, which covalently labels viruses and bacteria in the bloodstream, activates a potent immune response upon cell invasion.

Molecular biologists chemically modify proteins to label them for easy identification. The complement system has been using this same strategy for millions of years to label potential pathogens. In their study, Jerry and the team infected cells from different mammals with a range of viruses and bacteria that had been incubated in blood serum. They discovered that the C3 protein deposited onto an invading microorganism was taken into the cell with it, and that the cells could sense this C3 protein label and destroy the associated pathogen.

While Leo’s group found that many viruses are susceptible to this new system, they found that some important human viruses including poliovirus, rhinovirus and enterovirus have evolved a way of evading intracellular complement immunity. These viruses make an enzyme that cuts the C3 protein label and thereby avoid detection. However, the protease can be inhibited by a drug called rupintrivir, preserving the C3 label and making these viruses susceptible. This suggests that rupintrivir could be used clinically to enhance host detection of these viruses and allow the body to make its own effective response.

The idea that our immune system irreversibly labels pathogens in the bloodstream, and detects the label every time these pathogens try to infect our cells is a novel concept in biology. This type of defence could protect us against many different pathogens including Salmonella bacteria and viruses such as poliovirus, papillomavirus, rhinovirus, enterovirus, astrovirus, calicivirus, coxsackievirus and adenovirus.

This research was funded by the MRC and the European Research Council.