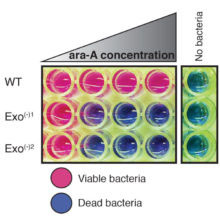 In their latest research on the DNA replication machinery from Mycobacterium tuberculosis, Ulla Lang in Meindert Lamers’ group in the LMB’s Structural Studies Division and collaborators at the Harvard School of Public Health in Boston, have revealed the existence of a novel exonuclease that proofreads new DNA as it is synthesised. This newly discovered proofreader prevents mutations in the bacterium and could be a successful drug target.

Tuberculosis (TB) is a widespread infectious disease caused by the bacterium M. tuberculosis. It mainly attacks the lungs and is a major threat to global health, killing an estimated 1.5 million people world-wide, each year. Treatment of TB is difficult and takes at least 6 months, with further complications caused by mutations that frequently lead to drug resistance against common antibiotics. To understand how these mutations may form, Meindert’s group studied DNA polymerases and exonucleases from M. tuberculosis. They found that unlike DNA polymerase complexes from the model bacteria Escherichia coli, which has separate proteins to carry out the polymerisation and the proofreading functions, TB mycobacteria have a single protein called DnaE1 that can do both.

Ulla Lang in Meindert’s group simulated DNA replication conditions in vitro with purified DnaE1 to investigate how this new protein functions. Meanwhile, collaborators in Sarah Fortune’s group in Boston mutated the DnaE1 protein in live mycobacteria. Together, they discovered that disabling one part of the DnaE1 protein, the PHP domain, completely removed the exonuclease function. This prevented proofreading and the offspring TB mycobacteria were very ill, containing many mutations.

A third of the world’s population is thought to be infected with M. tuberculosis. In 2013, there were 7892 cases of TB in the UK, approximately seven percent of which were drug-resistant strains. It is therefore hugely important to develop new antibiotics and to understand DNA replication fidelity to deduce how drug resistance occurs. Nucleotide analogues are drugs that mimic DNA bases and inhibit replication. They are used to treat cancer and viral infections, but until now they have not been used to treat bacterial infections. The mutated mycobacterium were found to be killed completely by the nucleoside analogue ara-A. This research suggests a new strategy for treating TB: To first inhibit the proof-reading activity of DnaE1, and then add a nucleotide analogue to force it to make more errors and kill the mycobacteria.

This work was funded by the MRC, the Helen Hay Whitney Foundation, the NIH, the Doris Duke Charitable Foundation and the National Institute of Allergy and Infectious Diseases.