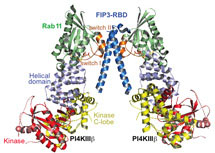 A collaboration between Roger Williams’ group here in the LMB’s Protein and Nucleic Acid Chemistry Division and Kevan Shokat’s group at the University of California, San Francisco has provided insight into potential targets for the design of a new class of anti-viral drugs.

Enteroviruses cause diseases including polio; hand, foot and mouth disease and the common cold, and there are currently no anti-viral treatments available to combat them. Within the body, these viruses reproduce themselves on intracellular membranes – the sacs that surround the tiny organelles within each cell – and use various large molecules present in the cell, including the lipid kinase called PI4KB during replication. PI4KB is also known to be important in the life cycle of other pathogens, including the malaria-causing parasite, Plasmodium falciparum.

By using a new approach developed by John Burke, a hybrid of mass spectrometry and X-ray crystallography, John and Alison Inglis from Roger’s group have found the first structure of PI4KB. They have solved the structure of a super complex of PI4KB with a protein called Rab11, which acts as a switch for different activities within the cell, and its effector protein FIP3 which regulates locations of proteins within cells.

The Williams group have also revealed how PI4KB binds to various small molecules with antiviral properties, including an inhibitor synthesised in the Shokat group. These small molecules obstruct PI4KB from working correctly, so they provide the basis for design of a molecule which could prevent enteroviruses from recruiting PI4KB to help them replicate, thus leading the way to new anti-viral and anti-malarial drugs. As these drugs would be specific for PI4KB, they could be safer and more effective than current anti-malarial therapies.

This work was supported by the Medical Research Council, the British Heart Foundation and the US National Institutes of Health.