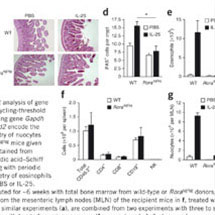 A group of collaborative researchers, led by Andrew McKenzie’s group in the LMB’s PNAC Division, have identified new processes that lead to the development of a novel cell (the nuocyte) implicated in allergies.

The team used multicolour flow cytometry, in vitro cell culture and in vivo models to find out more about the lineage of nuocytes and the signals that induce their development.

They found that nuocytes arise in the bone marrow and differentiate from common lymphoid progenitors – meaning that they are distinct, previously unknown members of the lymphoid lineage. Nuocytes also require the interleukin 7, interleukin 33, Notch and RAR-related orphan receptor αlpha (RORα) signalling pathways for their development. The transcription factor RORα was also identified as being critical for both the generation of nuocytes and allergic-like inflammation.