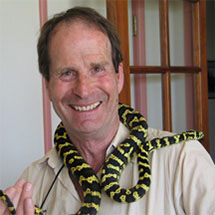 Peter Lawrence, an Emeritus member of the LMB, has been honoured with the 2011 Society for Developmental Biology (SDB) Lifetime Achievement Award.

The SDB gives its Lifetime Achievement Award annually to a senior developmental biologist in recognition of their outstanding and lasting contributions in the field. The award is given for the individual’s excellence in research and for being a superb mentor who has helped train the next generation of exceptional scientists.

Using the fruit fly Drosophila as a model organism, Peter has made many pioneering contributions to developmental biology, for example: analysing how morphogen gradients drive both pattern and polarity; joint discoverer of compartments in development; providing evidence that homeotic genes build a binary genetic address used to specify the developmental fate of precisely defined groups of embryonic cells. In the last 15 years he has been working on the mechanisms responsible for planar cell polarity and has made several discoveries.

Peter has been invited to deliver a lecture at the SDB 71st Annual Meeting in Montreal in 2012 where he will receive his award.