Researchers at LMB, lead by Dr Andrew McKenzie, have discovered a novel cell type that could lead to the development of new treatments for asthma, a disease that affects the lives of 5.4 million people in the UK.

The new cells, named nuocytes, are a key early source of Interleukin 13 (IL-13), a crucial immune chemical in the asthma response. Thus, nuocytes represent a previously missing link in the critical immune pathway that is turned on during asthma attacks.

IL-13 is produced when the immune pathway is activated. In this research, either parasitic worms or immune chemicals (IL-25 and IL-33) that are known to cause the production of IL-13 were used to turn on the immune pathway.
The research was carried out using a mouse model in which a fluorescent protein is produced whenever IL-13 production starts. Once the immune pathway had been activated, scientists could see that one particular cell type multiplied, and that these were marked by the fluorescent protein, indicating they were the major source of IL-13.

Closer examination of the cells revealed that they were a previously unidentified cell type. The new cell type was named nuocyte because these cells are the main source of IL-13, and nu is the 13th letter of the Greek alphabet.

The researchers then used a second mouse model to prove that nuocytes are a critical component in the immune pathway. This second mouse model cannot respond to IL-25 or IL-33, two of the main immune chemicals that start the immune response during worm infections or when asthma is triggered.

When the second mouse model was infected with parasitic worms, nuocytes did not multiply, levels of IL-13 did not increase and the worm infection was not cleared. However, when nuocytes were then added to these mice, the immune response was restored and the worms were expelled. 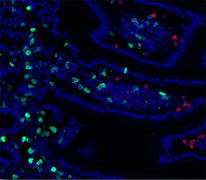 Notably, if the added nuocytes were unable to produce IL-13, the worm infection was once again not cleared. This proved that nuocytes are a key component of the immune pathway that is activated upon parasitic worm infection, or when asthma is triggered. The inappropriate production of IL-13 in asthma patients triggers the reactions that cause the airways to become narrower and irritated, making it difficult to breathe. It is hoped that by stopping nuocytes producing IL-13 these symptoms will be reduced.

Dr Michael Neuberger, Joint Head of LMB’s Protein and Nucleic Acid Chemistry Division and immunology expert, commented :”This is very exciting work. It is not often that that someone identifies a new type of white cell in the blood. This new cell, the nuocyte, not only plays a critical role in protection from parasitic infection but it is also likely to be of primary importance in asthma. So its discovery may well open up new avenues in the treatment of asthma as well as some allergic diseases.”

Research efforts are now focussing on identifying nuocytes in humans and verifying their involvement in asthma.

The research was published in Nature on 3rd March.