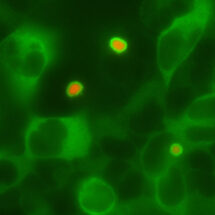 In order to function properly, many of the cell’s proteins need to be segregated to membrane-bound organelles and assembled into multi-protein complexes. Newly made proteins that fail to be localised or assembled properly must be promptly recognised by the cell and destroyed. These pathways of protein quality control are important because the accumulation of aberrant proteins can lead to neurodegeneration and various other diseases. Thus, a major goal of cell biology is to discover the cell’s protein quality control systems and determine how they work to keep cells healthy. Research by Manu Hegde’s lab in the LMB’s Cell Biology Division has found a new protein quality control pathway.

Because defective protein quality control is associated with neurodegeneration, Eszter Zavodszky in Manu’s group looked at whether Ubiquilin function might be impaired as part of these diseases. She found that, at least in cultured cells, the type of protein aggregates seen in Huntington’s disease (red, in the attached picture) can sequester the Ubiquilins in that cell (green). Additional experiments showed that sequestration of Ubiquilins prevents them from working normally, potentially contributing to the pathogenesis of diseases where such aggregates are commonly seen.

It is noteworthy that inherited mutations in one of the Ubiquilin genes in humans causes amyotrophic lateral sclerosis, a debilitating neurodegenerative disease. Manu’s group are now investigating how these mutations might affect Ubiquilin’s function in protein quality control. More generally, a mechanistic understanding of the cell’s protein quality control pathways might eventually lead to new therapeutic strategies for the various diseases associated with the accumulation of aberrant proteins.

The work was funded by the MRC, the Japan Society for the Promotion of Science (JSPS), a Grant-in-Aid for Young Scientists (Japan) and a St. John’s College Title A fellowship.