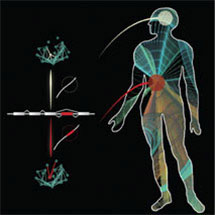 A comprehensive investigation of several large-scale datasets, led by M. Madan Babu’s group in the LMB’s Structural Studies Division, provides new insights into tissue-specific splicing – the mechanism responsible for increasing the functional diversity of proteins and for attaining tissue identity during development.

The research, published in Molecular Cell, focuses on the issue of how tissue-specific splicing can influence protein function on a genomic scale – a key question in understanding how functional diversity and tissue identity is achieved in an organism.

Although the human genome comprises around 23,000 genes it can give rise to many different cell types and tissues. This variety is partly due to tissue-specific splicing – a mechanism that generates diversity in gene products – which influences the way gene products interact, and thereby increases the diversity of the interaction networks across tissues.

In humans, over 50% of genes are estimated to be tissue-specifically spliced and this mechanism plays a key role in brain and heart development. Research has also shown that cell-type specific isoforms of key regulatory proteins are responsible for driving embryonic stem cell differentiation.
As lead researcher Marija Buljan explains: “Our findings show that, contrary to intuitive expectations, tissue-specific splicing does not change protein domain composition, but differentially includes intrinsically unstructured protein segments that expose conserved protein interaction motifs.”

In more detail, the research team’s findings propose that tissue-specific splicing leads to the recruitment of the same molecular function (often carried out by structured domains encoded by constitutive exons) to different contexts by mediating new protein interactions through the differentially spliced unstructured segment. For instance, they discovered that many kinases from diverse signaling pathways encode tissue-specifically spliced unstructured segments that could mediate recruitment of different proteins as substrates in a tissue specific manner. Thus, despite the isoforms sharing the same constitutively spliced protein domains, tissue-specific splicing can still influence protein function by mediating cell-type specific rewiring of molecular interactions.

The researchers’ results and specific predictions from the analysis provide a valuable foundation for future studies to elucidate the function of specific isoforms, as well as their impact on the overall interaction network, in finer molecular detail. Their work also illustrates the value in exploiting publicly available data on sequences, structures, expression and protein networks to discover new principles in biology.

The findings may also have clinical implications in the future. Earlier research revealed that de novo mutations in TS exons can result in altered interaction properties and may lead to cell-type-specific diseases such as cancer. The team’s findings open up the hope that, eventually, isoform-specific drugs may be developed which may have fewer side effects compared to drugs that target constitutively spliced regions.