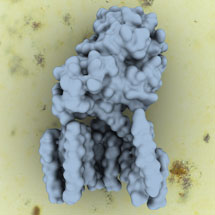 The latest advances in cryo-electron microscopy have enabled Sjors Scheres’ group, from the LMB’s Structural Studies Division, together with collaborators from Beijing in China, to solve the structure of human gamma-secretase, a membrane protein complex that has an important role in Alzheimer’s disease.

Gamma-secretase is made up of four different proteins which are all embedded within the cell membrane. This complex is a protease, cutting other proteins inside the membrane, which then act as signals to the cell. Many different proteins are cleaved, including the amyloid precursor protein (APP), which can form plaques in the brain associated with Alzheimer’s disease.

It has been difficult to study gamma-secretase until now and only very limited structural information on the complex has been found, despite many groups working on it. To produce a functional complex, Peilong Lu from Yigong Shi’s group in Beijing successfully expressed all four of the gamma secretase proteins simultaneously in mammalian cells, in work that has spanned several years. Then Xiaochen Bai from Sjors’ group used single particle analysis of cryo-EM data to determine the structure of the intact human gamma-secretase complex at 4.5 Å resolution.

Obtaining this structure is an important step towards understanding the mechanism of the complex. Approximately 150 different gamma-secretase mutations have been found in Alzheimer’s disease sufferers, so many pharmaceutical companies are trying to develop inhibitors of the complex. Unfortunately, inhibiting the entire complex also affects another signalling pathway called Notch, which can lead to cancer. Developing inhibitors for APP cleavage that do not affect Notch cleavage would be of great potential for developing an Alzheimer’s drug and the 3D structure will help this process.

The ordered part of the gamma-secretase complex is quite small, only 170kDa, and until recently, cryo-EM could not have been used to find the structure. However, recent huge advances in cryo-EM, in particular the combination of new detectors (developed at MRC-LMB and elsewhere), together with Sjors new image processing program RELION, have made it possible. This opens up exciting opportunities in many additional studies.

This work was funded by the MRC, the Ministry of Science and Technology of China, National Natural Science Foundation of China and an EU Marie Curie Fellowship.