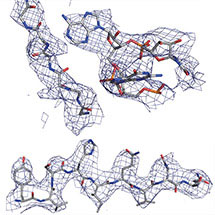 Determining the structure of proteins and other biomolecules at the atomic level is central to understanding many aspects of biology. X-ray crystallography is the best known technique for structural biology but, as its name suggests, it only works with samples that can be crystallized. Electron cryo-microscopy (cryo-EM) can be used to determine atomic structures of biomolecules that cannot be crystallized, but until now achieving high-resolution cryo-EM structures has been difficult.

In cryo-EM, a solution of a biomolecule of interest is frozen in a thin layer of ice, and this layer is imaged in an electron microscope. By combining images of many identical biomolecules in different orientations, it is possible to determine their three-dimensional structure. However, in order to determine this structure at high resolution, it is necessary to make many repeated measurements, often millions of images, to reduce high levels of noise. To date, cryo-EM structures with details fine enough to resolve atomic details have only been obtained for certain types of viruses.

Scientists from the LMB’s Structural Studies Division, led by Sjors Scheres, have made a spectacular advance in cryo-EM, producing structures of greatly increased resolution. They recorded images of ‘only’ 30,000 ribosomes and used these to produce a structure in which atomic-level details could be discerned. Two factors were crucial to this success. Firstly, they recorded images with much less noise on a new type of direct-electron detector, which was co-developed with the LMB. Secondly, because these new cameras are also very fast, they allowed the recording of movies while the sample was exposed to the electron beam. Because electrons cause molecules to move, images recorded on conventional, much slower cameras were often very fuzzy. Statistical movie processing allowed correcting for these movements, so that the ribosome structure could be determined to resolutions that were previously only attainable by X-ray crystallography.

Robert Glaeser from the Lawrence Berkeley National Laboratory commented: “I never expected that the ‘movie’ strategy of data collection would result in this much improvement”. He continued: “This work is a true landmark in the field of cryo-EM, indeed within molecular structural biology. A proverbial ‘paradigm change’, I would say!”

The structure of ribosomes is interesting in the context of antibiotic development since many antibiotics target the bacterial ribosome. However, the techniques developed in this work are not limited to ribosomes and could also be used to obtain high-resolution cryo-EM structures for other biomolecules of medicinal interest.

The work was supported by the MRC LMB and the Wellcome Trust.