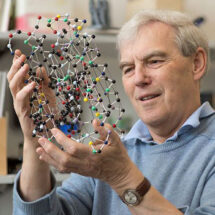 Richard Henderson from the LMB’s Structural Studies Division has been awarded the 2017 Nobel Prize for Chemistry. Richard shares the honour jointly with Jacques Dubochet and Joachim Frank “for developing cryo-electron microscopy for the high-resolution structure determination of biomolecules in solution”.

Speaking after today’s announcement, Richard responded “I am delighted for everybody in the field that the Nobel Prize for Chemistry has been awarded to acknowledge the success of cryo-EM.  I am particularly pleased that Jacques Dubochet has been recognised as the key person who kick-started the field in the early 1980s with his method of rapid freezing to make a specimen of amorphous ice, a crucial advance.”

Richard was born and educated in Scotland. Following a PhD in Cambridge Richard worked at Yale University before returning to the LMB where he has been working since 1973 on using electron microscopy to solve complex membrane protein structures. Together with Nigel Unwin he successfully determined the first structure of 2-D crystals of the membrane protein bacteriorhodopsin using electron microscopy in 1975. Work over Richard’s career has helped to advance the technique of electron microscopy, which bombards proteins or other large biological molecules with electrons rather than X-rays, so that the atomic structure of proteins can be determined. This has allowed us to see the structure of large, flexible and complex proteins, which have been impossible to analyse by traditional X-ray crystallography techniques.

In the 1990s, Richard realised that it would be theoretically possible to extract enough signal from randomly dispersed molecules using electron microscopy to obtain their detailed atomic structures. This insight and Richard’s drive and determination over the next two decades led to the development of better detectors for electron microscopes and better software to analyse the images. This revolutionised the technique of electron cryomicroscopy (cryo-EM), which involves flash-cooling molecules in a thin layer of aqueous solution before imaging them, a crucial method invented by Jacques Dubochet and his colleagues in the early 1980s. Computational processing the images is a key step, to which Joachim Frank made major early contributions.

In the last few years there has been a quantum step forward in these imaging techniques, due to better microscopes, better electron detectors and better computer programs for calculating the structure from the images. These improvements are now allowing atomic structure determinations of many protein and other macromolecular assemblies that were previously very difficult or impossible to obtain. The new structures provide important insights into the biological function of the assemblies and, by catalysing the subsequent development of new diagnostic or therapeutic tools, should help to improve the health and wealth of the country.

Richard has been presented with many awards for his work, and was recently awarded the Gjonnes Medal in electron crystallography by the International Union of Crystallography. He is a Fellow of the Royal Society and the Academy of Medical Sciences, and was Director of the LMB from 1996-2006.

Hugh Pelham, LMB Director, congratulated Richard on his spectacular achievements: “My warmest congratulations to Richard Henderson as well as Jacques Dubochet and Joachim Frank.  This is a fantastic recognition of very many years of work developing this technology, which is already helping to solve key problems related to human health. It is incredible what can now be done.  The impact will be profound and I am proud that the MRC Laboratory of Molecular Biology has played such a central role in this.”

The work of LMB scientists has previously been recognised by the award of 10 Nobel prizes: 7 in the field of chemistry and 3 for physiology or medicine. These prizes celebrate key advances in primary scientific research and for developing pioneering techniques for molecular biology.