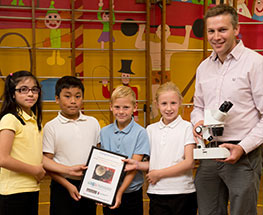 The winners of an LMB competition designed to inspire young children about the microscopic world have been announced. The project aims to give children new insights into the natural world and to help spark a long-lasting interest in science.

The Science Image Award scheme, which is part of the LMB’s Microscopes4Schools outreach initiative, lent a digital microscope to local primary schools so that the children could capture images of specimens they found at home or in the school grounds. The schools then submitted their work to a competition for the best image.

The entries were judged by Brad Amos, LMB emeritus scientist and a co-inventor of the point-scanning confocal microscope. First place was awarded to Colville Primary School in Cherry Hinton for their image of a poppy flower. The school was presented with a stereomicroscope fitted with a camera. The prize was donated by Brunel Microscopes Ltd, who generously sponsored the competition. Second and third places went to Great and Little Shelford Primary School for their images of a dragonfly larval case and a centipede. This school received science books as prizes. 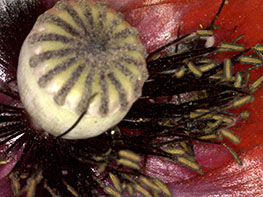 Simon Bullock, who co-organised the competition with Monica Brenni and former LMB members Isabel Torres and Marwah Hassan, said “The science image award scheme has been a big success. Many schools borrowed the microscope and hundreds of images were taken. The choices of specimens were very imaginative and the standard of the images consistently high. All of the teachers told us that the children really enjoyed the activity”. Simon plans to run the scheme again next year and interested schools can get in touch via the website.

The Microscopes4Schools project is funded by the MRC and the Lister Institute of Preventive Medicine.