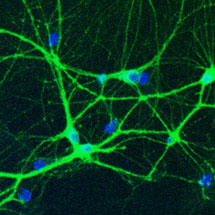 Researchers led by Dr Bazbek Davletov at the LMB have developed a new method of joining and rebuilding molecules in the laboratory and have used it to refine Clostridium botulinum neurotoxin type A (more commonly known as botox). This new approach will enable researchers to improve its use as a treatment for diseases such as Parkinson’s, cerebral palsy and chronic migraine. It also opens up new avenues to develop new forms of the toxin which could be used as a method of long-term pain relief.

In recent years, botox has been used increasingly as a medical treatment, with doctors exploiting its ability to relax muscles and nerves in order to still spasms and tremors, for example in patients with Parkinson’s disease. However, it is extremely toxic and can only be used in a very dilute form, limiting its development for further clinical use.

By breaking down botox molecules into two separate building blocks, the researchers were able to produce them separately and safely, and ‘clip’ them back together again. This new clipping method produced a refined botox-like molecule, practical for clinical use but without unwanted toxic effects.

The researchers propose that this technique will not only remove barriers to using botox as a treatment but could also allow them to produce new forms of botox with wider practical medicinal uses, for example as a long-term painkiller for those suffering from chronic pain.

Bazbek, who led the study, says: “This is the first time we have been able to treat protein molecules like Lego building blocks, mixing and matching them to create the basis for treatments that would not previously have been possible. It will now be possible to produce botox-based medicines in a safer and more economical way. We are giving botox a kind of facelift which could really make a difference. We are extremely excited as this method could potentially allow researchers to develop a form of chronic pain relief which could last as long as a single botox injection – around four to six months.”