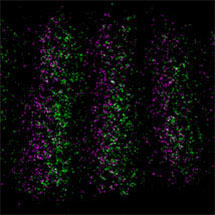 For cells to perform their elaborate functions, various components must be delivered to the right place at the right time. This is dependent on the cellular equivalent of a railway system; tiny protein machines called molecular motor complexes transport cargoes to their destination by traversing a network of polarized tracks within the cell. However, it is not clear how transport is coordinated by the motor complexes and how different cargoes are delivered to different destinations.

Mamta Amrute-Nayak and Simon Bullock, in the LMB’s Cell Biology Division, have developed a novel technique to isolate these motor complexes from cells and scrutinize their behaviour and composition. This method involves filming these complexes walking on tracks stuck on a glass surface.

By using the new technique, Mamta and Simon demonstrated that different messenger RNA cargoes instruct the motor complexes how to move, thereby controlling their sorting. A technique capable of counting single molecules revealed that sorting was associated with the ability of the RNAs to control the number of motors bound. They also showed that, in contrast to prevailing models in the field, there is only one RNA molecule per transport complex.

This study, published online in Nature Cell Biology today, constitutes the first successful attempt to study transport of RNAs outside the cell and raises important questions about how multiple motor complexes operate on a single cargo in time and space. In the long term, understanding transport at the fundamental level could help our understanding and treatment of diseases because aberrant transport processes are associated with neurodegenerative illnesses, and because motors are frequently exploited by viruses and bacteria during infection.

This work was supported by the Medical Research Council and the Lister Institute of Preventive Medicine.