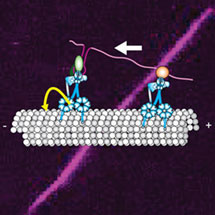 In order for a cell to function, its constituents have to be sorted to different locations. In many cases, this is achieved by an active intracellular transport system. Protein machines called cytoskeletal motors first recognise and bind to their cargos and then deliver them to their destination by moving along a network of tracks. Different types of cargos move in different directions and for different distances along the tracks, and this plays a major role in determining their localisation within the cell. Many of these cargos associate with the same types of motor proteins. A key unanswered question is therefore: what controls the motility of these cargos along the track? In vitro studies in which motors were tethered to artificial cargos such as beads have suggested that the number of motors bound is the key factor that dictates cargo movement. However, these experiments did not include proteins that associate with motor complexes in the cell and are therefore candidates to regulate transport of real cargos.

Simon’s lab had previously established the first in vitro method for studying movement of mRNA cargo by the dynein motor along one of the two major track types, the microtubules. In the current study, unprecedented details of this mRNA transport process were revealed by creating a new, highly efficient in vitro motility assay, and by optimising the methods to track the movements of mRNA-motor complexes. Importantly, because the mRNA-motor complexes were assembled using cell extracts, they also included the accessory proteins that associate with motor complexes within the cell.

The key experiment studied an mRNA that naturally localises to one side of cells within the fruit fly embryo. Harish and Simon found that individual molecules of this mRNA travel in one of two ways: they either move back-and-forth along the microtubule or they move for long distances towards only one end of the track, the so-called minus end.  By engineering the number of binding sites for the dynein motor Harish and Simon could show that motor copy number is not the determinant of unidirectional movement. Instead, signals within the RNA appear to change the behavior of some dynein motors so that the complex is only capable of one-way traffic. Future work will be aimed at understanding which accessory proteins bound by the RNA signals regulate dynein and how they do this.

Motor proteins are frequently exploited by viruses and bacteria during infection, and defective motor transport is associated with neurodegeneration. Learning how cargo-motor complexes operate is important to help understand and treat these diseases.

The work was supported by the Medical Research Council, the Lister Institute for Preventive Medicine and the Cambridge Commonwealth Trust.

Simon’s Home Page
Link to the Paper in eLife