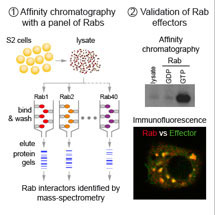 Cells contain specialised membrane-bound compartments called organelles, which are vital to the cell as they allow it to separate different biochemical reactions that otherwise might interfere with each other. To function correctly, these intracellular compartments need to recruit proteins from the cytoplasm, and since every organelle has a specific role, each one needs a particular set of proteins. To allow these proteins to find the right organelle, each organelle has a unique ‘identity’ created by specific molecules that act as beacons to help the cytoplasmic proteins recognise their correct destination. Rab GTPase proteins act as such beacons, with different Rabs on different organelles binding directly to specific cytoplasmic proteins (or ‘effectors’) and thus recruiting them to the right location.

Until recently, relatively few Rab effectors were known, and for some Rabs none had been found and so their role was unclear. However Sean Munro and his group in the LMB’s Cell Biology Division have now identified a whole raft of new Rab effector proteins, including several linked to human disease. Alison Gillingham and others in Sean’s group used the fruit fly, Drosophila melanogaster, as a model organism. They took 23 Rab GTPase proteins that are also found in humans, activated them, and attached them to small beads. They then added proteins from Drosophila to see which would bind. The researchers identified numerous new Rab binding proteins that are conserved in both flies and humans.

The identification of these new proteins as Rab binding partners has the potential to open up new research areas, and in particular to help understand what these proteins are normally doing in healthy cells. Some of them are of no known function, but are linked to human diseases such as Parkinson’s Disease and spastic paraplegias, implying that an error in membrane traffic may underlie these illnesses. In the long term this may help us understand what is causing the symptoms of Parkinson’s Disease and spastic paraplegias.