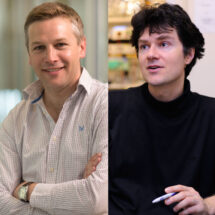 Two LMB group leaders, Simon Bullock from the Cell Biology Division and Philipp Holliger from the PNAC Division, have been named in the European Molecular Biology Organisation (EMBO) list of new members announced on the 20th of May.

EMBO elects new members annually on the basis of scientific excellence and outstanding research contributions. The organisation promotes excellence in life sciences by supporting talented researchers, and stimulating exchange of scientific information. Simon and Philipp join more than 1700 of the best researchers from Europe and around the world.

Simon Bullock
Simon’s group studies microtubule-based motor complexes that deliver the components of cells to specific locations. Incorrect function of these complexes has been linked to diseases such as neurodegeneration. Simon’s research aims to understand how specific cargoes are recognised by motors and how the movement of transport complexes is regulated. He has a long-standing interest in the cytoplasmic transport of mRNAs, which controls where specific proteins are made and operate in cells. His group are also studying how the transport of different cargoes is orchestrated in cells within an intact nervous system. Genetics, single molecule microscopy and biochemistry are combined to address these questions.

Philipp Holliger
Philip’s research interests span the fields of chemical biology, synthetic biology and molecular evolution. He is trying to understand the fundamental principles that shape genetic systems and is looking at whether DNA and RNA, the two nucleic acids that store and propagate information in biology, are better than simple alternatives. As part of this, Philipp is working on entirely synthetic genetic polymers (XNAs) that are capable of information storage, propagation and evolution. He is also trying to construct an RNA molecule that can self-replicate and mutate.