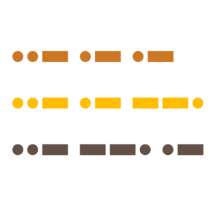 New research from the LMB’s Cell Biology and Structural Studies Divisions has answered a long-standing problem in molecular biology: how does the ribosome decode the signals to stop protein synthesis? In cells, all proteins are produced by ribosomes that ‘read’ messenger RNA (mRNA) one codon, or three nucleotides, at a time. Protein translation terminates when a ribosome reaches one of three nucleotide sequences that encode for stop codons. These sequences of UAA, UAG, or UGA are universal, signalling for translation termination in all kingdoms of life. Skipping a stop codon or stopping too early produces an incorrect protein, and this type of error is linked to over 10% of human genetic diseases. Thus, accurately decoding stop codons is critical for the normal functioning of all cells.

Specifically recognising stop codons is a complex problem. Bacteria have broken this problem down by having two separate protein factors that, together with the ribosome, recognise different combinations of stop codons. By contrast, all eukaryotes, from yeast to humans, have adopted a completely separate solution, where a single factor (eRF1) recognises all three stop codons on the ribosome. How eRF1 is able to do this while avoiding all other codons was unknown. A particularly intriguing puzzle was how eRF1 avoids UGG (which codes for the amino acid tryptophan) if G is acceptable at both the second and third positions (for the UGA and UAG stop codons).

To solve this problem, Susan Shao from Ramanujan Hegde’s group in the Cell Biology Division developed a method to capture the ribosome in a state of stop codon recognition using an inactive mutant of eRF1. Together with co-lead author Alan Brown and Jason Murray from Venki Ramakrishnan’s group in the Structural Studies Division, they visualised these ribosomal complexes using high-resolution electron cryo-microscopy (cryo-EM).

These structures revealed that stop codons form an unexpected contorted conformation within the ribosome. This unique conformation stacks the second and third stop codon nucleotides on top of each other, allowing eRF1 to decode these two nucleotides as a single unit, which is crucial to eRF1’s ability to recognise all three stop codons while discriminating against UGG. “The solution is remarkable in its simplicity”, said Alan, to which Susan added “and explains much of the previously puzzling biochemistry”.

It is hoped that these new insights will not only enrich our understanding of the fundamental process of protein translation, but also help the design of novel therapeutics that can prevent premature termination of proteins in genetic diseases.

This work was funded by the MRC, the Wellcome Trust and St John’s College, Cambridge.