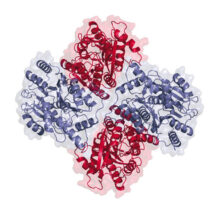 Information transfer in the nervous system occurs at synapses, where presynaptic signals are interpreted by postsynaptic receptors. Ingo Greger’s group, in the LMB’s Neurobiology Division, study this process with a focus on AMPA-type glutamate receptors (AMPARs) at various levels of complexity. AMPARs are the prime mediators of excitatory neurotransmission and are regulators of synaptic plasticity, which underlies learning. Ingo’s group have revealed the first structure of an intact (full-length) heteromeric AMPA receptor, which provides a framework to decipher AMPAR architecture and signalling.

Ionotropic glutamate receptors (iGluRs) are cation channels, which mediate signal transmission by depolarising the post-synaptic membrane in response to L-glutamate release from the presynaptic neuron. There are three major iGluR subtypes and together their activity is pivotal to learning and memory. The first subtype, the AMPA-type receptor (AMPAR) initiates signalling and activates the second subtype, the NMDA receptor (NMDAR), thereby admitting Ca2+ ions that drive synaptic plasticity and ultimately learning. The rapid, sub-millisecond response of the AMPAR permits faithful transmission of high-frequency presynaptic impulses. In the brain AMPARs preferentially exist as hetero-tetramers, composed of the GluA1-4 subunits in various combinations. Their signalling properties are dominated by the GluA2 subunit, which is present in the majority of AMPARs, yet the architecture and subunit arrangement of GluA2-containing AMPAR heteromers has remained elusive. 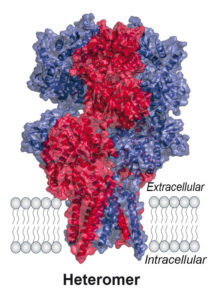 Using X-ray crystallography and single-particle electron cryo-microscopy (cryo-EM), in combination with other techniques, Ingo’s group were able to decipher the organisation of GluA2-containing AMPAR heteromers. Crystal structures of the GluA2/3 and GluA2/4 N-terminal domains reveal a novel compact conformation with an alternating arrangement of the four subunits around a central axis. The GluA2/3 cryo-EM structure, together with simulations, emphasise that AMPARs are dynamic complexes. The observed vertical compression of the extracellular region is expected to be of functional consequence in synaptic environments.

The GluA2/3 structure opens avenues to further our understanding of AMPAR signal transmission. In addition, AMPA receptors are drug targets and the new structure offers development to novel protein interfaces of the receptor. There are several diseases associated with the receptor including epilepsy, depression and dementia.

The work was funded by the MRC.