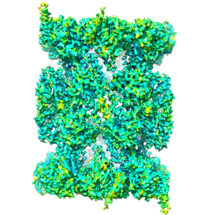 The proteasome is a protein recycling complex that plays a critical role in the smooth running of our cells. It is present in all multicellular organisms and facilitates cell renewal and the controlled death of damaged cells. Paula da Fonseca, from the LMB’s Structural Studies Division, and Edward Morris, from the Institute of Cancer Research, have determined the high resolution structure of the human proteasome core complex for the first time by electron cryo-microscopy (cryo-EM), revealing the structure of an inhibitor drug bound in the active site.

Cell division is controlled by the synchronised destruction of regulatory proteins. The proteasome is a highly regulated protease complex that chops up proteins that have been tagged for destruction. Blocking the proteasome triggers controlled cell death, particularly in cells that divide rapidly such as cancer cells.

To reveal the structure, Paula and Edward looked at the human proteasome using state of the art electron cryo-microscopy at the LMB. After processing thousands of images of the proteasome, they recreated its three-dimensional structure using image analysis software, including the details of a prototype drug blocking the active sites. This work shows the emerging potential of using cryo-EM to solve protein complexes, in particular for structures that can not be crystallised and thus revealed by X-ray crystallography techniques. Using cryo-EM also has the advantage that the complexes can be viewed under conditions that are close to those found in the human body.

The proteasome allows cancer cells to divide rapidly. Molecules that inhibit the proteasome cause the death of these rapidly dividing cells, and some cancer drugs have already been developed to target the proteasome. This pioneering study shows that cryo-EM can be used for rational drug design, and could help the development of new therapeutic drugs for the treatment of conditions such as cancer, autoimmune diseases and viral infections.

This research was funded by the MRC and Cancer Research UK.