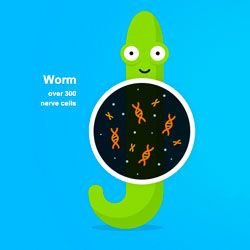 Anyone with an interest in science can take part in an egg-themed online video game, organised to help advance the LMB’s research into the circuitry of the brain.

The ‘WormWatch Lab’ project involves watching footage of nematode worms and spotting every time they lay an egg. The project, which is sponsored by the MRC to celebrate its Centenary, is a collaboration between the LMB’s Bill Schafer and André Brown and citizen science organisation Zooniverse.

Bill explains: “We want people to watch movies of the nematode worm C. elegans to study behavioural changes brought about by mutations in their genes, many of which are closely related to human genes. Egg-laying in C. elegans requires the proper functioning of a neural circuit to activate the muscles that open the vulva to expel eggs. This circuit is controlled by a neurotransmitter called serotonin — the same molecule that affects human brain states that impact mood, appetite, and aggression.

“If we observe a mutant that lays more or fewer eggs than normal, this is a hint that something has gone wrong in the egg-laying neural circuit or muscles which could have far reaching implications, maybe even teaching us something about genes involved in depression in humans.”

There are thousands of genes without a known function and screening for worms with egg-laying defects is time consuming. Because human vision is still by far the best method for detecting egg-laying, mass public participation projects can make a genuine and valuable contribution to neuroscience research.

Taking part in the event is easy as Bill explains: “Most of the movies are only 15 minutes long, so analysing one will not take very much time. However, we have over 10 thousand movies in the database, including some longer ones, so there is plenty of data to analyse if people are keen. We’ll be keeping the project going as long as there is interest.

“Participants can keep coming back to contribute again and again. Finding egg-laying events is not difficult for the human eye, which means that the ‘WormWatch Lab’ is suitable for people of all ages who want to contribute to real scientific research.”