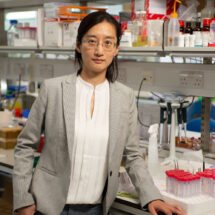 The LMB is delighted to announce the appointment of Jing Ren as a Group Leader in the Neurobiology Division. She will begin her programme in January 2020, joining more than 50 group leaders at the LMB, who represent a diverse set of scientists recruited from around the world.

Jing’s overarching aim is to understand the molecular mechanisms underlying the formation of the circuitry of the serotonin system. This system is the most frequent pharmacologically targeted neural system for treating psychiatric disorders, including depression and anxiety, which are among the leading causes of disability globally, affecting one in four people in the world. She will combine her skills of molecular biology, neural anatomy, physiology and behaviour neuroscience to investigate how the serotonin system is assembled during development, and the consequences of its disruption.

Jing’s recent work has revealed that the serotonin system within individual nuclei in the brain stem contains parallel serotonin sub-systems that influence mice behavioural functions. Her team will identify the molecules that control the wiring and transmission specificity of serotonin system by applying single-cell RNA sequencing, proteomic mapping and tissue clearing technology. Thereafter, she will investigate how genetic defects of the serotonin system induce psychiatrically relevant behaviours by combing ex vivo and in vivo imaging and electrophysiology recording, chemogenetics and optogenetics. Her work will advance our understanding of the relationship between neurodevelopment and psychiatric disorders.

Jing completed her PhD under a joint program of National Institute of Biological Sciences, Beijing & College of Life Science, Beijing Normal University, China, and was awarded the Ray Wu prize in 2011. She did her postdoctoral study at Stanford University and was awarded Tianqiao and Chrissy Chen Fellowship in 2017.

The LMB welcomes Jing and looks forward to her work that ultimately aims to link genes that define the specific serotonin sub-circuits during development to mental states in the adult. Her research will complement the goals of the LMB, that is, to support collaborative and cutting-edge research towards identifying fundamental mechanisms that will advance treatment for brain diseases.