Home > Insight on Research > The mother’s role in protecting the fetal genome from aldehyde damage is revealed. 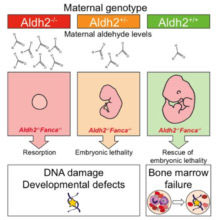 Whilst a mother’s metabolism provides essential nutrients to enable embryonic development, both mother and embryo can also produce reactive metabolites that can damage DNA. Research undertaken by Nina Oberbeck in KJ Patel’s group, in the LMB’s PNAC Division, has uncovered how the embryo is protected from these genotoxins.

Birth defects are common and are a substantial burden to human health, but their causes are complex and often due to many factors. Maternal exposure to X-rays and chemotherapeutic agents give rise to birth defects, mainly because these agents cause direct damage to the fetal genome. The developing embryo limits this damage through DNA repair, which reduces the potential of these mutagens to corrupt development.

Failure of this mechanism can be seen in humans. Children afflicted with Fanconi Anaemia (FA) have a genetic deficiency in a DNA repair pathway, and are often born with a multitude of birth defects, as well as intra-uterine growth retardation. Provided these defects are not so severe as to cause early death, most FA patients develop bone marrow failure and are cancer prone.

KJ’s group has previously shown that the FA DNA repair pathway may have evolved in order to repair damage caused by aldehydes. Aldehydes are a group of highly reactive chemical compounds, which are able to damage DNA and are produced naturally in our cells through cellular metabolism. They are also acquired through the consumption of food and alcohol.

As described in their latest paper in Molecular Cell, KJ’s group use mice which lack both Aldh2 (the enzyme that detoxifies aldehydes) and the FA DNA repair pathway, to show that aldehydes, produced naturally in a mother through her cellular metabolism, can diffuse across the placenta into a developing embryo during pregnancy. These maternally-derived aldehydes can damage the DNA of the developing embryo and corrupt its development. Maternal aldehyde detoxification is needed to protect the genomic integrity of the developing fetus.

Pregnant mice that lacked Aldh2 and were hence unable to detoxify aldehydes were injected with an acute dose of ethanol to mimic a binge-drinking dose of alcohol; this led to developmental defects in the embryos. Restoring the mother’s ability to detoxify aldehydes prevented these ethanol-induced defects. Furthermore, although maternal aldehyde detoxification is required to protect development, it is fetal Aldh2 and DNA repair that are important to preserve blood stem cells from DNA damage and attrition. The fact that the mother can protect the genomic integrity of the developing fetus is a new and significant finding. This study also lends support to the idea of ‘intrauterine programming’, where early insults to the fetus, including DNA damage, can lead to disease, such as diabetes and other metabolic disorders, in adult life.

Maternal Aldh2 deficiency is, in fact, a common problem. Approximately 540 million individuals, mainly across South East Asia and Japan, carry the ‘Asian flushing mutation’ and are hence genetically deficient in Aldh2. This population is sensitive to alcohol, and alcohol consumption increases their risk of developing head and neck cancer. Although it is not known how this mutation impacts on fetal wellbeing and birth defects, this research suggests that alcohol consumption during pregnancy in this population could have dangerous consequences for a developing fetus, and could lead to an increase in the incidence of birth defects or childhood leukemia.

This work was funded by the Medical Research Council, Cancer Research UK, March of Dimes and Children with Cancer UK