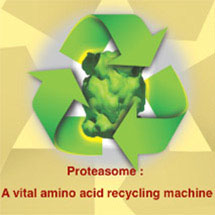 The proteasome is essential for the controlled degradation of a large number of unwanted or damaged proteins in all cells and thereby controls virtually every cellular process. While it has long been known that inhibition of proteasome degradation is lethal, the underlying mechanisms have remained elusive.

Anne Bertolotti’s group, in the LMB’s Neurobiology Division, have discovered that proteasome inhibition causes a lethal amino acid imbalance in yeast, mammalian cells and Drosophila. They found that cells can actually cope with high levels of protein waste, which accumulate following proteasome inhibition, but the resulting depletion of critical amino acids is lethal.

When the proteasome is inhibited the intracellular levels of amino acids, the protein building blocks, become detrimentally low. As a result, cells try to adapt by inducing the canonical responses to starvation, the integrated stress response and autophagy, in a vain attempt to replenish the pool of intracellular amino acids. Anne’s group found that the amino acid scarcity resulting from proteasome inhibition is the signal that causes induction of both the integrated stress response and autophagy.

They found that in yeast, mammalian cells and Drosophila, the deleterious consequences of proteasome inhibition are rescued upon amino acid supplementation. Surprisingly, these rescuing effects occur without any detectable decrease in the levels of proteasome substrates in proteasome-inhibited cells. This study establishes that the proteasome substrates that accumulate upon proteasome inhibition sequester an essential pool of amino acids and it is the resulting failure of amino acid homeostasis that causes cell death following proteasome inhibition rather than the accumulation of unwanted proteins.
These findings shift a paradigm by demonstrating that the proteasome serves a basic housekeeping function as an amino acid recycling machine, rather than being just a waste disposer. The study suggests that protein waste may not be intrinsically toxic but is detrimental to cells as it sequesters a pool of amino acids, which would otherwise be recycled.