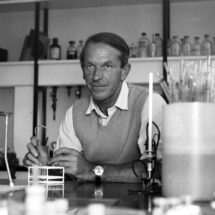 A new online exhibition, sponsored by the MRC, explores the work and legacy of double Nobel Laureate, Fred Sanger. From his early work on sequencing proteins to his pioneering technique for sequencing nucleic acids, Fred’s work led to groundbreaking discoveries and opened up a whole new world for medical research and treatment.

The Sanger Online Exhibition brings together a wealth of material from many sources, including letters, notebooks, papers and photographs, as well as recollections from former colleagues of Fred. It is curated by Dr Lara Marks, Senior Research Fellow in the Department of Social Science, Health & Medicine, King’s College, London. Lara comments ‘despite his achievements, relatively few people outside the scientific community know about Sanger’s work and how DNA sequencing came into the world. This exhibition brings together the story of his life and work and how the techniques he developed came to be adopted for medical purposes.’

Fred, a former Head of the LMB’s Protein and Nucleic Acid Chemistry Division, spent his entire scientific career in Cambridge. He joined the Department of Biochemistry, University of Cambridge as a PhD student and then started his postdoctoral research there on the sequencing of proteins. Funded by the MRC, he helped set up the MRC Laboratory of Molecular Biology and moved there when the new laboratory opened in 1962. He switched his research to the sequencing of nucleic acids, and remained at the LMB until his retirement in 1983. He is one of only four people to be awarded two Nobel prizes.

Fred’s development of techniques to read the sequences of proteins and nucleic acids opened up a whole new world for research. In particular, the method for nucleic acid sequencing shaped the way that genomics and biomedicine were explored and was key to the Human Genome Project, the international collaboration to identify all the approximately 20,000-25,000 genes in human DNA. The information this provided has given crucial insights into the genetic profile of humans, the differences in disease between different people and helped designed more effective drugs – leading to the application of genomics in routine healthcare

The Sanger Online Exhibition is launched on 13 August 2015, the anniversary of Fred’s birth. It is part of Lara’s ‘What is Biotechnology’ website, an educational resource about the people, places and technologies that have enabled biotechnology to transform our healthcare and the world we live in today. It also includes a previous online exhibition, ‘The Story of monoclonal antibodies’ which explores the work of Fred’s colleague, César Milstein.