An article written by Barry Bentley, a PhD student in the LMB’s Neurobiology Division, telling the story of how the tiny nematode worm continues to make a big impact on medical research, has been awarded a commendation prize in the Max Perutz Science Writing Award 2015.

Barry’s article, ‘The Worm Wide Web: mapping the networks of the brain’, was one of three to receive commendation prizes. First prize was awarded to Emily Eisner for her article: ‘Premonitions of Psychosis’ and the runner-up prize was awarded to Alex Binks for his article: ‘Espionage, Martinis and Explosions: How Reprogramming Viruses can Help us Fight Cancer’.

The Max Perutz Award is in its 18th year and encourages MRC-funded PhD students to communicate their work to a wider audience. Entrants are asked to explain why their research matters in just 800 words in a way that engages a general audience. 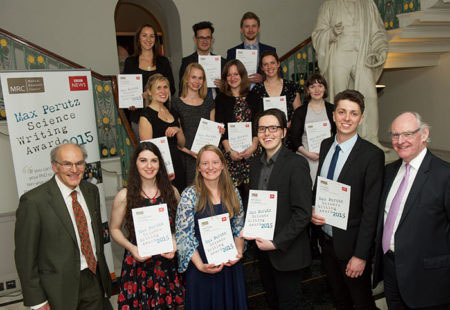 The award is named in honour of Max Perutz, one of the UK’s most outstanding scientists and communicators, and founder of the LMB. Max, who died in 2002, was awarded the 1962 Nobel Prize in Chemistry for his work using X-ray crystallography to study the structures of globular proteins, including haemoglobin. Max was also a keen and talented communicator who inspired countless students to use everyday language to share their research with the people whose lives are improved by their work.

Barry’s article is published below.

The Worm Wide Web: mapping the networks of the brain

On a quiet morning in February 2003 the space shuttle Columbia started her descent into the Earth’s atmosphere following a 15 day mission in space. Unfortunately, she never landed. Due to a heat shield that had been damaged during take-off, the space shuttle disintegrated in the intense heat of re-entry, tragically killing all seven astronauts on-board.

As investigators sifted through the wreckage, they found something remarkable. Amongst the experiments that had been sent into space were a number of microscopic worms called Caenorhabditis elegans. Amazingly these worms had survived the plummet to Earth, adding to a long list of achievements for this tiny species.

The worm has become something of a star in the world of science. As well as being able to survive extreme environments, worms have contributed to a number of important discoveries. They were, for example, the first animal to have their genome sequenced, and work on worms has contributed to three Nobel prizes.

Worms are a frequent visitor to space, where they are used to study the effects of micro-gravity, but as a neuroscientist my interest in the worm is closer to home. I am interested in how it can help us understand the brain.

The worm only has about 300 neurons, or brain cells, a great deal less than the 100 billion in the human brain. Despite this, worms have rich and varied behaviour. They can forage for food, sense and escape threats, form memories, find mates, and even perform some tasks we can’t, such as sense magnetic fields.

Thanks to its small size, it has been possible to make a detailed map of how the worm’s brain is wired — a task that is many years away for larger brains such as those of mice or humans. Due to our shared genetics, this map can shed light on how our own brains work.

The map of the worm’s brain was completed in Cambridge in 1986 following a decade of painstaking work by a small group of scientists. These scientists carefully traced the tangles of nerve fibres, noting how they connected to one another. The map carried with it the expectation that we would soon have a complete understanding of the worm’s brain.

While a lot of progress has been made since then, we have yet to achieve this understanding. There are numerous reasons for this. One is that neurons do not only communicate through the fibres that the map charted; they also communicate through an invisible network of chemicals that diffuse throughout the brain, similar to hormones. The most notable are a class of molecules known as monoamines.

Monoamines, which include dopamine and serotonin, play an important role in the brain. Psychiatric conditions, from depression to schizophrenia, have all been linked to abnormalities in monoamine signalling; but we don’t know how these systems work. It is here that the humble worm is once again becoming a pioneer.

My work has been to collect this information together, to fill-in the invisible links that were left-out of the original map 30 years ago. To understand the role of these new connections, I am looking at their placement in the wider network of physical wiring. The techniques I use are the same ones used to analyse other networks, such as the internet or social networks. These techniques can help me to identify important cells, and patterns of connectivity which reveal their function.

Using these new techniques, we are making exciting discoveries about the monoamines. We have found that they form loops alongside the wires in the brain, which appear to regulate the flow of information. We are investigating whether these loops might play a role in learning or other high-level behaviours. We have also found that the control centres for the different monoamines are tightly connected to one another. This suggests that the different chemicals coordinate their action in ways that were previously unknown. Psychiatric conditions often involve multiple monoamines, and I am now working with psychiatrists to understand how my observations in the worm can be translated to humans, to shed light on mental health and brain disorders.

The idea that worms can help us understand mental illness is not as far fetched as it might sound. Worms have behaviours that mirror drug dependence and eating disorders, and much of their brain chemistry is similar to ours.

So next time you take a walk in nature, or look up at the night sky, remember the soil-dwelling, spacefaring heroes of science, who are helping us pave the way towards a happier and healthier future.