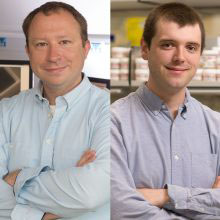 The LMB is delighted to announce that Chris Russo and Gerry Crossan have progressed from Independent Investigator Scientist positions to become Group Leaders at the LMB. Chris and Gerry join more than fifty-five group leaders at the LMB, representing a diverse range of science and recruited from around the world.

Chris will be continuing his work in the LMB’s Structural Studies Division where he focuses on improving atomic resolution imaging of biological specimens by electron cryomicroscopy. Many of the outstanding questions in biology and medicine are difficult to address because there is no way to directly look at the complex molecular machines responsible for life. Chris’s group works on developing new instruments and methods for imaging biological molecules, with the aim of improving cryo-preparation and imaging to the point where the electron microscope can be used to image the atomic resolution structure of all purified macromolecular complexes and the sub-nanometer resolution structure of any biological specimen.

Chris plans to accomplish this by first studying the physical principles underlying the current limitations in cryomicroscopy and then reengineering the critical components in the imaging system to improve resolving power. His work has already led to advances by improving the grid upon which biological samples are imaged with an electron microscope. Chris’s group draws on recent developments in nanoscience, solid-state physics, surface chemistry, electrical engineering and materials science to achieve these improvements.

Chris added, “The LMB is a unique place to work on an interdisciplinary and long-term project such as this, and I feel privileged to get the chance to work with such multi-talented people.”

Chris studied electrical engineering and philosophy at the University of Notre Dame, before completing his PhD in Applied Physics and Medicine at Harvard University and the Massachusetts Institute of Technology (MIT), where he studied DNA-nanotube interactions by various microscopy techniques. Following this, he held a post-doctoral position in the Harvard Physics Department, working on nanopore fabrication for DNA sequencing, and then moved to LMB where he joined Lori Passmore’s group. Chris became an Independent Investigator Scientist at the LMB in 2016 and a group leader in 2018.

Gerry is part of the LMB’s PNAC Division where he studies the maintenance of genome stability in stem cells, in particular germ cells. The repair of damaged DNA is essential in all cells to ensure that the fidelity of the genome is maintained and to prevent mutations arising. This is of particular importance in stem cells, as mutations will not only affect that individual cell but the many millions of progeny derived from it. Germ cells ultimately give rise to either sperm or oocytes – when these gametes come together they produce a whole new organism, meaning that any mutations that arise in the germ cell will appear in every cell of the offspring. The maintenance of the genetic integrity in the germline is of critical importance to ensure the faithful transmission of the genome from one generation to the next. Failure to accurately maintain genome stability in germ cells has catastrophic consequences for the offspring and to the survival of the species. Despite their importance and unique lifecycle little is known about germ cells repair genome damage.

To better understand the mechanisms that protect the genetic integrity of germ cells, Gerry’s group will combine DNA sequencing, mouse genetics and in vitro culture systems. The aim is to understand how DNA damage arises in germ cells but also how these damaged cells are preventing from passing on mutated DNA to subsequent generations.

Gerry added, “Our studies will hopefully elucidate the mechanisms that prevent us passing deleterious mutations on to our children. LMB offers a uniquely collaborative environment and allows us to pursue unexplored questions.”

Gerry studied Medicine at Queen’s University, then joined the LMB as a University of Cambridge PhD student in KJ Patel’s group in 2008. Gerry then completed a post-doctoral position before becoming an Independent Investigator Scientist in 2015 and a group leader in 2018.