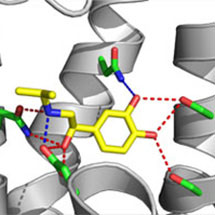 In a recent issue of Nature, the groups of Chris Tate and Andrew Leslie in the LMB’s Structural Studies Division, in collaboration with Gebhard Schertler now at the Paul Scherrer Institut, Switzerland, have reported the determination of the structures of the β1 adrenergic receptor (β1AR), a GPCR, when bound to four different clinically relevant agonists.

G protein-coupled receptors (GPCRs) are integral membrane proteins that are the largest family of membrane receptors found in the human body. They play a key role in intercellular communication by binding hormones (agonists). Agonist binding to the receptor causes a conformational change that results in the activation of the receptor, which allows G protein coupling and eventually a cellular response. The pivotal role GPCRs play in communication throughout the body makes them key drug targets.

The β1 adrenergic receptor (β1AR) in the heart is the target for beta blockers, whilst the β2 adrenergic receptor in the lungs is the target for drugs used in the treatment of asthma. Together, these two classes of drug comprise 4.4% of the FDA approved drugs, with 27 million prescriptions for beta blockers annually in the UK.
The scientists have determined the structures of β1AR bound to four different agonists; isoprenaline (the first noradrenaline analogue used for the treatment of asthma), salbutamol (also known as Ventolin, which is used in inhalers for asthma treatment), carmoterol (currently in phase III clinical trials as a single daily dose treatment for asthma) and dobutamine (a cardiac stimulant used in heart failure).

The high-resolution structures show how the agonists bind and how these drugs may be improved by rational drug design. In addition, the structures identify key structural changes that occur immediately upon agonist binding, which are essential for the subsequent conformational change that allow G protein coupling and activation.